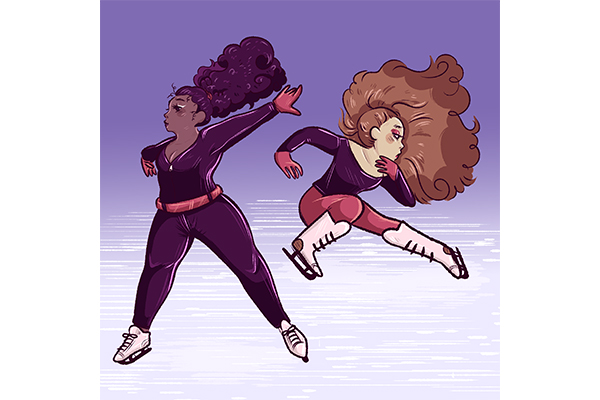 Blistering feet, bruises and a group of UT students have gathered to become a much-needed home for a group of figure skaters looking to find their place on campus and on the ice.

Figure skating organization 32 Degrees Figure Skating Club was founded by a trio of students who noticed a lack of a figure skating community at UT, said Alice Gee, a sophomore biochemistry major and co-founder of 32 Degrees.

The organization does not compete and is just for fun, which provides members with the opportunity to meet other skaters and form a community, Gee said.

“Everyone has a similar lifestyle,” Gee said. “It’s easier to work together, make new friends and ease into college life.”

“Whenever we were looking at the UT ‘23 Facebook page, I put that I was a skater,” Mayberry said. “Immediately, you see other people that are like, ‘Oh my gosh, me too.’ It’s an immediate connection.”

Not only did they start the organization to build a team of skaters, Gee said the benefits from skating were a major factor.

“In skating, you feel the frustration and you feel all of these emotions,” Gee said. “It’s kind of cathartic in a way. It’s a good stress reliever.”

Lucy Lee, a psychology sophomore and member of 32 Degrees, said she decided to join the organization because she missed the satisfaction that comes with skating. Lee said she skated competitively until her sophomore year of high school.

“(I missed) that feeling of accomplishment after a competition, or like when they get a new jump,” Lee said. “You won’t ever get that feeling unless you actually experience that feeling of landing a jump. That’s so satisfying, and it’s what keeps me going.”

Journalism freshman Shreya Chari said this organization has helped change her perspective on skating. She now views skating as less of a competitive sport and more as a fun activity.

“I kind of see skating in a new light,” Chari said. “I feel like I put a lot of years into this sport, so I don’t want to just suddenly stop it because it was a big part of my life for so many years.”

Lee said she also believes that skating for fun, rather than competition, has helped her enjoy the sport more.

“I think through this organization I can get back on my feet and back into skating,” Lee said. “After I quit, I was throwing away everything except for my skates. It was so stressful. But this organization, I think, since I’m skating for fun and for my own joy — I think I’m (going to) have a different perspective on skating.”

Gee said building this community of skaters has been a comforting experience for her because quitting skating meant a potential career change. She eventually decided to become a doctor after considering becoming a skating coach.

“It is comforting knowing that I always have a home wherever I go,” Gee said. “So whether (I’m) at the rink or just with other skaters I can find a place to be comfortable.”