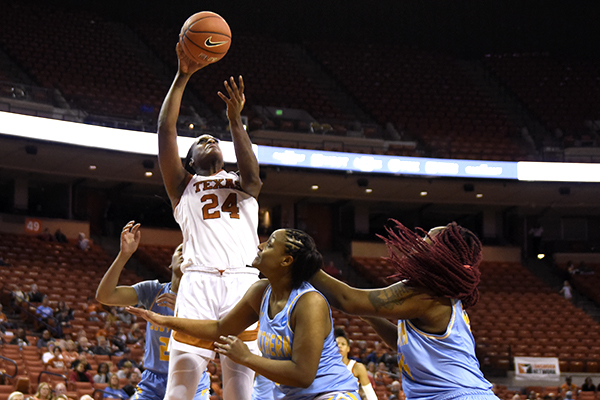 Editor's note: This story was uploaded three days after the game took place. This delay was caused by maintenance to the website.

When Iowa State went up 11-0 during the first quarter of its game against Texas on Monday, the Longhorns looked outmatched. The Cyclones connected consecutive strikes from three as Texas’ defense broke down and its players failed to score points. But the Longhorns eventually found a rhythm, running away with the game in their 81-75 comeback win in Ames, Iowa.

“This is a really hard place to win,” Texas head coach Karen Aston said. “I told our team that anytime you get a road win it’s a huge thing, and obviously, in Ames, it’s really big.”

Senior guard Jada Underwood ended Texas’ first quarter scoring drought with a much-needed three. However, the situation still looked bleak for the Longhorns, who trailed Iowa State 13-3 at its worst. Then, the Cyclones started turning the ball over and Texas capitalized as its scoring attack began to take hold. By the end of the first quarter, the Longhorns trailed by three points, and Iowa State committed as many turnovers as it had made baskets.

Texas took its first lead of the game in the second quarter when senior guard Lashann Higgs shot one off from three. Later on, senior guard Sug Sutton and sophomore center Charli Collier extended Texas’ lead with big-time layups. Sutton closed the half with a beautiful floater that gave the Longhorns a 37-31 lead before heading into the locker room.

“We got our hands on a lot of balls in the first half,” Aston said. “We were disruptive, and we were able to hang on.”

In its 65-63 loss to TCU, Texas crumbled in the third quarter. But when the Longhorns returned from the break Monday night, the ghosts from Texas’ previous match up disappeared. The roles had been switched. Texas went on a 12-0 run in the third quarter as Iowa State struggled to score.

“We just knew we had to come out strong,” senior forward Joyner Holmes said to Fox Sports after the game. “For the last couple of games, we’ve been losing our lead in the third quarter, and that’s what we stuck to today. … We have to find a way to get the lead and then keep it."

With WNBA scouts watching in the crowd, Holmes was the star of the show in the second half. The dominant senior could have added several plays from the period to her highlight reel, but an extra special moment came late in the third when she scored her team-high 17th point of the night on a high-elevation jumper. Holmes also recorded eight rebounds and three assists in the matchup.

“I was trying to be as efficient as possible,” Holmes said. “After missing that first layup, I was like, ‘You gotta get it done, you gotta get the work done.’”

The Longhorns led by significant margins in the fourth quarter, but Texas fought until the end to hold off the Cyclones’ rallies. In the last 10 minutes, Higgs did her part with scores at the line and off the glass, and freshman guard Isabel Palmer was fearless from the arc and the paint as she shot a three and battled through Cyclone defenders.

In the last seconds of the game, Iowa State shrank its defecit down to six with a crucial three. But once Higgs went to the line again and the Longhorn defense pressured the Cyclones into mistakes, the contest was wrapped up.

After the close loss to TCU, Holmes said Aston worked the team hard in the gym, and it seemed to pay off. This time, Texas was on the better half of a narrow victory.

“It was a long practice — a very long practice,” Homes said. “Coach was not really happy about the loss, but neither are we. Kudos to TCU. They played a really good game, but we’re looking forward to West Virginia on Sunday.”