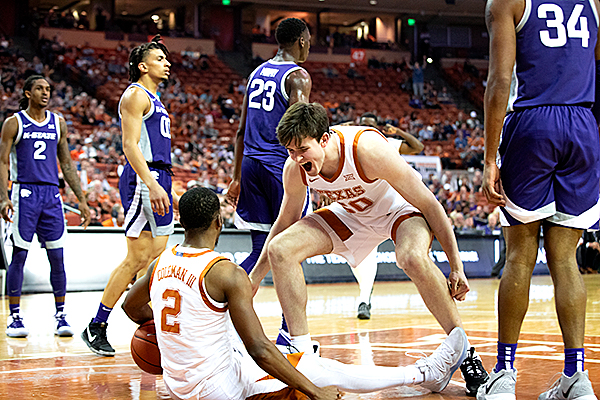 It may have taken Texas a week, but on Saturday night, the Longhorns finally left the Frank Erwin Center with their first Big 12 victory of the season.

Sophomore guard Courtney Ramey caught a bullet pass from junior guard Matt Coleman midway through the second quarter. Just a second remained on the shot clock. Ramey set his feet and prepared to launch what could have been a prayer with such little time to get the shot off. But instead of rushing it, he calmly knocked down a 28-footer, turned to the crowd and held a three sign up to his chest.

While it may be a routine play in D1 basketball, it’s something Texas has lacked in recent games. But during Saturday night’s 64-50 win over Kansas State, the Longhorns didn’t lack much of anything.

The Longhorn’s 1,800th program win was a complete team effort, with three players scoring in double digits and 10 players receiving minutes — the most help Texas has received in Big 12 play.

In addition to the usual dosage of Coleman, Ramey and junior forward Jericho Sims, who fell just short of his fourth-straight double-double, fans also experienced a rare sighting of freshmen Donovan Williams and Will Baker, two highly-touted four and five-star recruits, respectively.

Baker, who missed his previous 16 3-pointers to start his collegiate career, finally banked in his first three with just under two minutes remaining.

Though Baker is just 1-17 from beyond the arc, Smart’s confidence in his five-star freshman isn’t wavering.

“For this one to go in, even though it went off the glass, we’ll take it,” Smart said. “He just has to go out there and fight. He showed good fight and good aggressiveness around the basket and took a step in that direction.”

With various pick-and-pops starting to work their magic for Baker, they’ve worked beautifully for sophomore forward Kamaka Hepa in his past two games. The Alaska native has shot over 60% in the last two contests, including a prayer of a buzzer-beater to give Texas a four-point lead heading into the intermission.

While Texas managed to secure a lead going into the locker room, the first half left much to be desired on both sides of the court.

Texas’ first half was nothing shy of a slugfest, but the Wildcats matched it with some sloppiness of their own. Kansas State turned it over 18 times but was not outdone by Texas’ whopping 20 turnovers.

But efficient shooting, timely play-making and a particularly stout defense proved to be the Longhorns’ saving grace after halftime.

Texas’ second-half defensive performance was nothing short of dominant, both as a team and individually. The Longhorns forced six shot clock violations and junior guard Jase Febres put up a career-high four blocks, all in the second half.

“I used to do this in high school,” Febres said of his career night defensively. “I felt like I’ve been able to do this, but (in college), I’m a little guy now.”

While Texas has a few major areas to clean up ahead of a road trip to Oklahoma State, primarily turnovers and fouls, Smart and the Longhorns can finally breathe a sigh of relief after securing their first Big 12 win.

“In such a defensive-minded league, there are some scores that are not pretty,” Smart said. “Games that are not necessarily a work of Picasso in terms of offensive production, but it’s all about finding a way to win.”