Comeback falls short as Texas loses to No. 19 West Virginia on the road 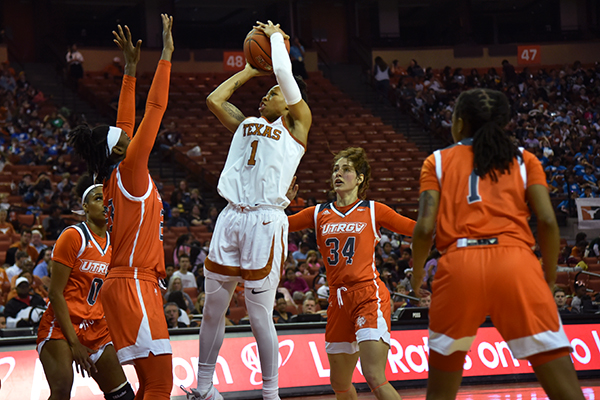 With the game in the Longhorns’ hands up until the final minute, it appeared as though Texas women's basketball would complete a comeback from an 11-point first-half deficit. But the comeback was not to be, as the No. 19 West Virginia Mountaineers overcame a deficit of their own in the final minute to take a home game in Morgantown, winning 68-63.

“Credit to West Virginia for coming ready to play, and really just finishing,” Texas head coach Karen Aston said. “I’m proud of our team for coming back, but (there’s) no real explanation for why we didn’t show up for almost two-and-a-half quarters.”

Texas held a one-point lead with 44 seconds left, but the Mountaineers seized control behind a Kysre Gondrezick 3-pointer after an offensive rebound. This would prove to be the turning point in the final minute, as West Virginia extended its lead to three on the next possession and wisely chose to foul Texas for the rest of the game, keeping the Longhorns from even attempting a potentially equalizing 3-pointer.

“You don’t ever want to say that one play (determines the game),” Aston said. “But Big 12 games are gonna come down to possessions, and I knew that needing a three at the end of the game was going to be tough. They’re a switching defense that knows how to handle that situation. I thought we did the right thing by taking the aggressive 2, but at some point if you need a three, you need a three, and that’s going to be tough so you can’t get yourself in that situation.”

With this loss bringing the Longhorns’ record to 1–2  in the Big 12 and 9–6 on the year, there was a certain level of frustration evident in Aston’s voice in the postgame press conference.

“I would think that we could make a box-out when the game is on the line,” Aston said. “But the way we played for almost two-and-a-half quarters is more the reason why we (lost). I mean, you can’t show up and play like that against a team like West Virginia. They’re really good, and credit to them for being ready to play because we weren’t.”

The Longhorns had been riding a four-game win streak heading into conference play, including wins over then-No. 17 Tennessee in Knoxville and over the No. 1-ranked Stanford Cardinal at home just before the holiday break. But that success has not translated into Big 12 play, as Texas dropped a home game to unranked TCU before falling on the road today to drop to 1–2 in the conference.

“You can’t win a Big 12 game and play two quarters. You just can’t,” Aston said. “This is a good league. This is a really good basketball team we just played.”

Even with a growing frustration as the Longhorns have had a disappointing start in conference play, there are still positives to take out of today’s game, Aston said. Yet, the eight-year head coach was left mostly frustrated.

“We had a shot to win and, in my opinion, played two quarters hard,” Aston said. “So it’s encouraging for us, but how many times are we gonna do this before we learn lessons about not being ready to play?”