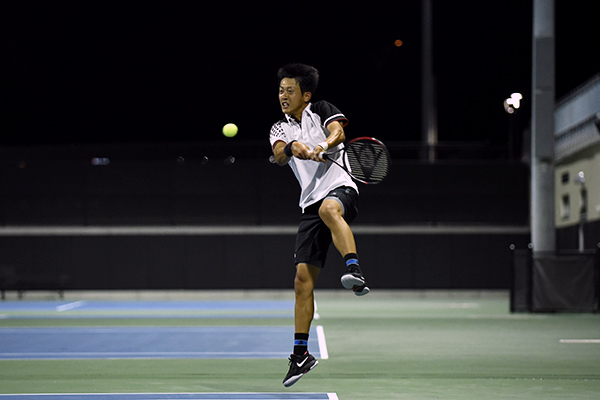 Fresh off a national championship, it didn’t take long for No. 2 Texas men’s tennis to be tested in a marquee matchup against the No. 1-ranked Florida Gators to start the season.

But the Longhorns didn’t break under the pressure of playing from behind, winning 5-2 in Gainesville’s hostile environment.

Before the match, head coach Bruce Berque said Florida would be a great test of the team’s toughness for a group that had four out of seven players on the court playing their first college dual match.

“This match is about seeing how tough we are,” Berque said before the match. “We’ll see if we can get six guys who look hungry from start to finish.”

The team certainly showed their toughness in a comeback victory, not only in overall points but in several singles matches.

The match against Florida was eerily similar to last May’s semifinal showdown between the two teams.

The team followed the impressive win with a 6-1 victory in Dallas against SMU, completing its first road trip of the season.

In both games on the road trip, the Longhorns dropped their doubles point. But the Longhorns went 11–1 in singles and notched several impressive comebacks against a Florida squad that had all six singles players ranked nationally.

“If we can establish the competitiveness and the toughness that we need to have early, then I think the sky’s the limit for this team,” Berque said.

The biggest comeback of them all was No. 2-ranked senior Yuya Ito’s win over No. 31 Oliver Crawford. Ito dropped the first set 3-6 but stormed back to win the second 6-1 and clinched the victory for the Longhorns in a 6-4 third set win.

Ito has now won 16 straight singles matches. But perhaps even more encouraging for Texas was senior Christian Sigsgaard’s return to form after spraining his foot last fall in a 6-1, 6-4 victory against Florida’s No. 4-ranked Sam Riffice.

Freshmen Siem Woldeab and Eliot Spizzirri seem to have cemented their place in the lineup at third and fourth singles. Woldeab faced No. 17-ranked Duarte Vale of Florida and fell behind early 5-1 but rattled off 11 straight games that secured a critical singles win.

“We’ve got four or five guys that are pretty close towards the bottom of the lineup,” Berque said. “You could make a convincing argument for any of those four guys.”

Despite lineup uncertainty and doubles woes, Texas started off the season strong.

Last year, the Longhorns dropped three losses in their path to a national championship. This year, with fresh faces, the expectations are set sky high for a team that’s looking to do much of the same.