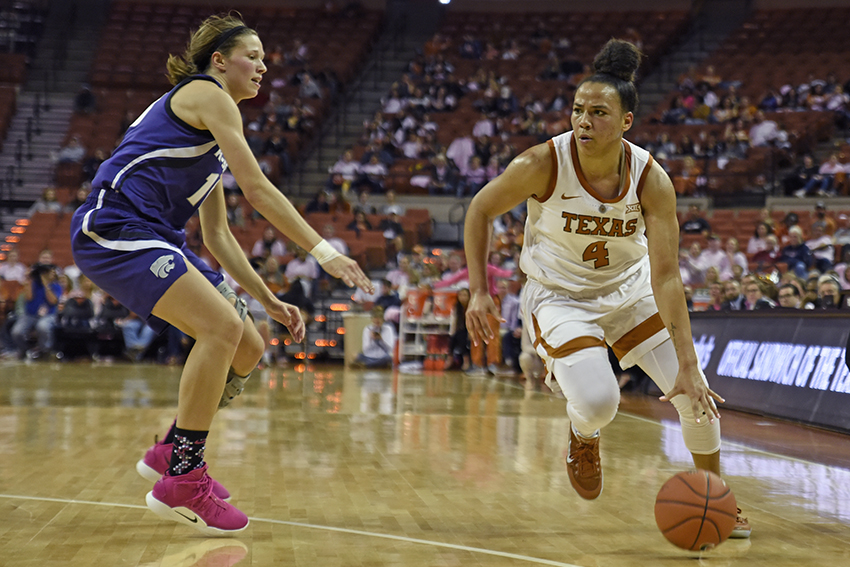 Withstanding foul trouble, a road crowd and a late run by Kansas State, Texas women’s basketball closed out a win in the “Little Apple” of Manhattan, Kansas, for the Longhorns’ third road win of the season, beating the Wildcats 71-63.

“I think that any win that you have in the Big 12 on the road is a big win,” Texas head coach Karen Aston said. “In particular for our team, it’s been a struggle in Manhattan, Kansas, as today was. I just thought that we were able to withstand the runs and have the mental toughness of being able to finish some plays and finish the game.”

Escaping Manhattan with a victory was never a guarantee for the Longhorns. Holding a 12-point lead with eight minutes left, Texas allowed the Wildcats to claw their way back into the game, cutting the lead to four with 56 seconds left. Just as the Wildcats did against West Virginia and Oklahoma State, they faced too large a deficit with too little time remaining.

“I don’t know if our team remembers what happened yesterday, as most young people don’t,” Aston said when asked if the Wildcats’ habit of making comebacks was a focus in the huddle. “Most coaches say that right now, can you focus on the things that you can do well and you can control? Just because you have a lead or you’re down, it doesn’t mean anything in this league.”

The focus for the Longhorns has certainly been on their own game, which had to adapt to the Wildcats’ game plan Sunday. Texas hit a season-high 11 3-pointers, with freshman guard Celeste Taylor hitting four en route to a 15-point performance.

That success from beyond the arc proved a good offset for the foul trouble the Longhorns found themselves in, as Aston said the game plan was built around creating pressure on Kansas State.

“The way they run their offense, it’s difficult sometimes to get a double (team), and I thought that ball pressure helped,” Aston said. “It bought some time for our bigs to get around sometimes. Obviously we got (sophomore center) Charli (Collier) in foul trouble and (senior forward) Joyner (Holmes) in the process of (doing) that.”

With their third conference win, the Longhorns now sit above .500 in Big 12 play for the first time this season.

Now, as Aston and the Longhorns look to make a run in conference play chasing after an NCAA tournament bid, the focus has to be on handling a conference that does not surrender any easy victories.

“We came back two games ago against West Virginia, (Texas) Tech made a run … against us,” Aston said. “I think we expect runs, no matter who it is, just because nobody’s going to hand a game to you in league play.”