Austin celebrates Hi, How Are You? Day with concert 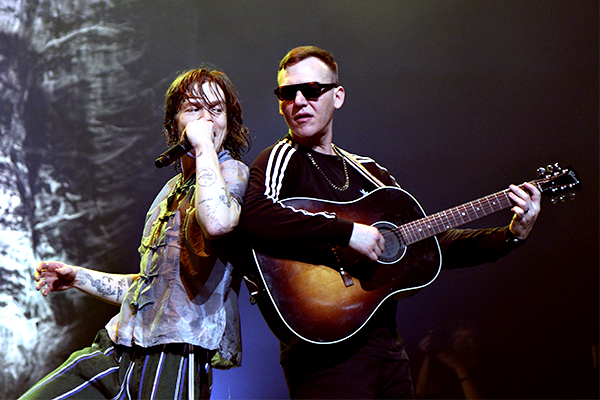 Austin celebrated the third Hi, How Are You? Day with a concert headlined by Cage the Elephant on Wednesday. The event was held in honor of late Austin-based artist and musician Daniel Johnston to raise awareness for mental health.

The first Hi, How Are You? Day was held on Jan. 22, 2018, Johnston’s birthday, and encouraged Austinites to check in on loved ones and destigmatize mental illness. The event is named for his famous mural “Jeremiah the Innocent,” which features a frog stating the phrase, “Hi, How Are You?”

American Campus Communities sponsored and livestreamed the concert at its student housing properties in Austin. In 2018, the group purchased the Goodall Wooten building on which Johnston painted “Jeremiah the Innocent” in 1993. American Campus Communities purchased the building to preserve the mural, according to the concert’s press release. The most recent occupant of the building, restaurant Thai, How Are You?, closed its doors earlier this month.

At Wednesday’s concert, the Hi, How Are You Project revealed that Johnston’s mural will be recreated for the first time in Seattle, Washington.

“This has resonated with people globally,” said Tom Gimbel, co-founder of the Hi, How Are You Project. “Jeremiah now stands for being open around mental health, and I think that’s a great legacy.”

Proceeds from the concert will go to the Hi, How Are You Project, a nonprofit organization that encourages open conversations about mental health.

American Campus Communities also partnered with the Hi, How Are You Project last year to implement the organization’s training sessions on holding healthy conversations about mental illness.

Gimbel said his organization wanted a concert for their event because of the appeal to college students and the sense of community at a concert.

“When you go to a concert, you’re not in isolation,” Gimbel said. “You’re together with others, you’re moving at the same rhythm and it’s a joyful experience.”

Gimbel also served as Johnston’s manager for over 25 years and said Johnston was an inspiration. His work often dealt with themes of mental illness as he had schizophrenia and bipolar disorder, Gimbel said.

“There were no walls,” Gimbel said. “He was very open about what was he was feeling and about what he was dealing with.”

Austinite Will Johnson said he was a fan of Johnston’s work, which led him to discover and work with the Hi, How Are You Project at their booth at Austin City Limits.

“I was a big fan of Daniel’s music before he passed,” Johnson said. “I just wanted to do anything for the organization.”

Gimbel said the organization’s partnership with American Campus Communities allowed them to reach young adults who may be learning how to deal with mental illness or who are unsure of how to help a friend.

“Thanks to our partnership with American Campus Communities, the Hi, How Are You Project is able to reach more students than ever before to spark meaningful conversations around mental health and wellness,” Gimbel said in a press release.

Austinite Maureen McCoy said Johnston’s work still holds a unique place in the city, and she hopes people continue to remember his legacy.

“It’s a fitting tribute to him,” McCoy said. “Hopefully, we keep moving forward and (mental health) stays on the forefront.”