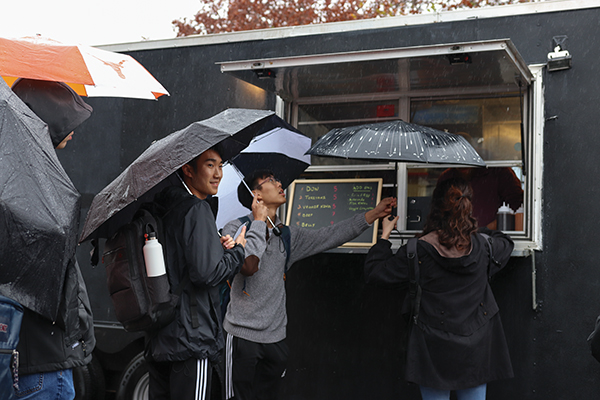 Don Japanese Kitchen reopened its popular food truck behind the University Co-op at noon Wednesday after closing its brick-and-mortar store on Guadalupe Street earlier this month.

“(Don) is kind of nostalgic,” said Nathan Chin, electrical and computer engineering senior. “It used to be like every Friday; I’d come here at 11:30 (a.m.), wait in line 30 minutes before they open, usually buy it for friends and eat it afterward because the line was so long. I understood why they were closing, but I had my fingers crossed that they would reopen.”

About 60 people were lined up in front of the food truck by 11:30 a.m., and the area remained packed for the duration of its opening.

Don opened its first brick-and-mortar restaurant on The Drag in 2017 and later opened a location in San Marcos in April 2019. Psychology sophomore Sarah Jarrett said some people assumed the rent for storefronts on Guadalupe Street is the reason why the restaurant closed. The news of the closure came two days after another restaurant on The Drag, Thai, How Are You?, closed their doors.

“I Facebook messaged them asking if they were closed, and they messaged me back yesterday saying they were reopening,” Jarrett said. “I think (reopening) the food truck is a good move right now, especially with everything closing. Honestly in the future, if they want to open a storefront, they should just not do it on Guadalupe because it’s so expensive.”

English freshman Fatima Perez said she “zoomed” over to Don as soon as she got out of class.

“The reason why I know about (Don) is because at orientation my group leader brought us here for our wing dinner,” Perez said. “The prices are good, the portions are great and it’s close to my dorms. Every time we’d go to (Don), it’d always be packed. If any business were to be open on The Drag, I would expect (Don) to be.”

Sen Mao, owner of Insennity Food Truck, said he was familiar with Don’s popularity when he opened his truck about a year ago.

“(Don) used to be a very successful food truck in this specific park,” Mao said. “(Don’s reopening) is very good because it’s a popular food truck, and it helps everybody’s business go up. That’s the way I see it. There’s more traffic and visibility for every business here.”