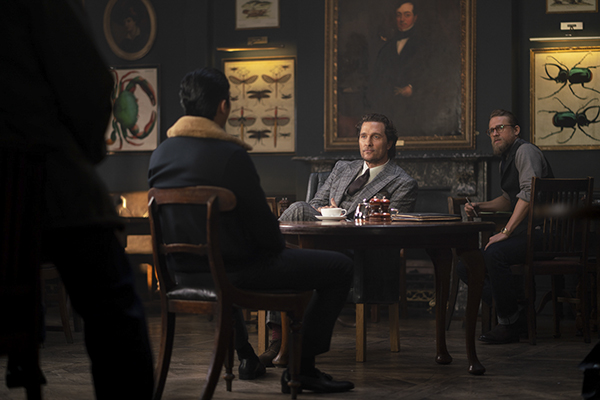 Back on the big screen, Matthew McConaughey is certainly in his element with this latest endeavor.

Directed by Guy Ritchie, “The Gentlemen” is a whirlwind of a movie telling the story of Mickey Pearson (Matthew McConaughey), an American running a marijuana empire based in London. After whispers spread that Mickey intends to sell his business and retire with his wife Rosalind, a series of chaotic events begin to unfold as multiple attempts are made to obtain Mickey’s business by unsavory criminals.

The movie opens with a classic McConaughey monologue. He discusses what it takes to be a man in his position. Referring to himself as a “king,” Mickey is quickly surprised to be put in a perilous situation, immediately twisting the tone and strapping viewers in for the intense ride that follows. At the start, the overload of characters and storylines make the beginning of the movie feel overwhelming and confusing. However, as the story progresses, it quickly becomes clear how cleverly these elements tie into each other.

The movie is pulled together by a talented and engaging cast. McConaughey perfectly embodies Mickey, a nuanced character that remains calm and gives no reason to have his confidence or power questioned. However, when Rosalind is put in danger, McConaughey effortlessly transitions from a composed boss to a rageful and desperate husband, showcasing his broad emotional capacity in subtle yet impactful ways.

Though the movie tells a rather linear story, it is mostly told as flashbacks from the viewpoint of Fletcher (Hugh Grant), a private investigator hired to spy on Mickey and the chaos surrounding his business. In his narration, Fletcher reveals all of the men who have attempted to acquire Mickey’s business in the form of a threat for personal gain. In doing so, Grant embodies his most comedic role to date, bringing banter to the movie with hilarious albeit absurd storytelling.

Fletcher is strategically leveled out by Mickey’s most trustworthy confidant Ray (Charlie Hunnam). Despite the stress he endures, Ray and his loyalty to Mickey can never be questioned with Hunnam’s daring and layered performance. Although he is confronted with many dangerous men and situations, Ray makes intelligent and careful decisions, brought to life by Hunnam and his chemistry with every other actor sharing the screen.

On top of a stellar cast, the writing and production of the film are spectacular. Despite toggling between the past and the present, the overall structure of the film is highly successful. No scene feels too long or too short, and the sequence in which the action takes place is created into a well thought out and perfectly timed order.

Attention to detail also makes the film incredibly strong. Colors play a key role in the storytelling, strategically placing gold and red props and clothing with Mickey to showcase his power as the king of his business contrasting the dark colors surrounding Fletcher and his cowardice. With a buoyant musical score and consistently pleasing shots, it is not hard to get completely drawn into the characters and their stories.

Contrary to what might be expected of the genre, “The Gentlemen” tells a unique story that is sure to entertain. Despite initial confusion over multiple plotlines, numerous twists and a great deal of action eventually bring the story together, and viewers will certainly have fun watching the amusing chaos unfold on their screens.