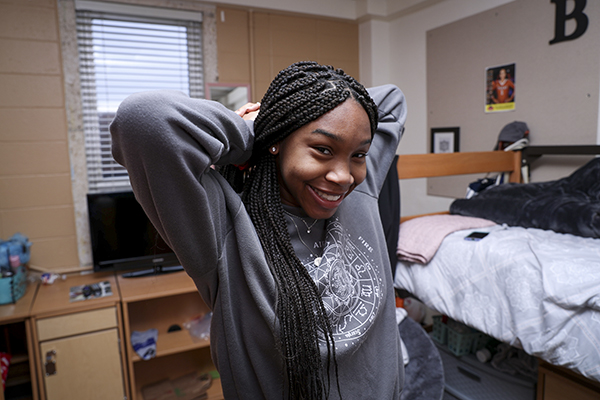 Like most 7-year-old girls, Brandy Branham grew up playing with her two sisters’ hair. From a young age, Brandy began to learn how to braid and twist, even practicing on her sisters’ Bratz dolls.

“At first, when she started braiding, it would take six hours and sometimes be crooked and bad,” Brandy’s sister Brooke Branham said. “But as she kept practicing, it got better.”

When it was time for the girls to have their hair seriously braided, the family attended a local stylist in their hometown of Tyler, Texas. But at the age of 15, Brandy’s braiding skills shifted from a hobby to a necessity.

“There weren’t very many African American people (in my hometown), especially at the high school I went to,” Brandy said. “Since the market was not saturated, prices were extremely high. For you to go to someone and get your hair braided was $150-$200.”

Now a 17-year-old government freshman, Brandy recognized the same need for haircare in the UT community and wanted to offer African American students prices they could afford.

In 2018, Nielson reported black customers attributed the largest consumer spending in ethnic hair and beauty. However, because Austin’s African American population has struggled to keep up with the rest of the city’s growth over the last decade, the hair-braiding market in Austin remains expensive.

“People are in college, and money is tight,” Brandy said. “No one just has $200 laying around that they can spend on their hair.”

After focusing on adjusting to UT during her first semester, Brandy decided to set up shop after winter break. She said she thought, “I’m broke, so I guess it’s time to tell the world,” and posted a video showcasing her previous work on Twitter.

Brandy said she immediately received direct messages asking for her services from students she had never met before. Now, her post has over 1,200 views.

“I think this is a really good opportunity to engage with other African American students,” Brandy said. “We sit down and watch movies while we’re doing it so it goes by quick. Even though the process can be kind of long, it’s fun.”

Brandy said she offers various braiding and twisting styles in her entry-level business, such as box braids, Senegalese twists and Marley twists.

“With the world of social media, there’s always some new trend with braiding and twisting,” Brandy said. “People are like, ‘Can you do this? Can you do this?’ and I’m like, ‘Dang, I just started doing this.’”

Bianca Langford, a graduate student at UT-Tyler, has been one of Brandy’s customers for two years.

“It’s important for me personally to maintain it, keep it clean and protect it at all costs,” Langford said. “It’s a very important part of not only my appearance, but who I am as a person. It’s a part of (Black) history.”

Langford said she prefers Brandy’s services over other stylists because of the lower prices, quick braiding time, braid durability and quality. She said Brandy’s work typically takes no more than three hours.

“I’ve had my hair braided by other people before where I’ve had to sit for six to eight hours,” Langford said.

Although the hours are long and balancing her business with schoolwork will be challenging, Brandy said her passion for braiding wins in the end.

“This past semester, I went through periods where I didn’t (braid), and I told my best friend, ‘Heaven, come here and let me braid your hair.’ I was just tired of not braiding,” Brandy said. “It sounds weird, but I just love braiding.”