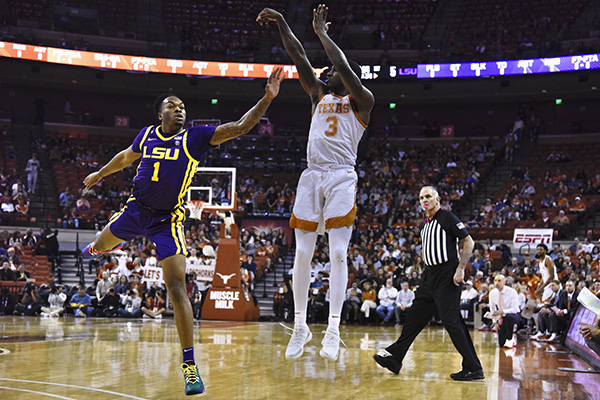 Shaka Smart didn’t get the result he wanted in the win column, but he seems to have finally found some semblance of passion, something that was absent in Texas’ 38-point loss on Monday.

Saturday afternoon’s heartbreaking 69-67 loss showed the best of both worlds of this season’s Texas Longhorns. After facing a 10-point deficit at the end of a listless first half, Texas showed passion, grit and tenacity that was unseen throughout the beginning of the season.

Texas nearly overcame two frontcourt injuries — one from a starter — a 16-point second half deficit and a swathe of LSU fans at the Erwin Center as its late rally came up just short against the Tigers.

“It’s disappointing, but we dug ourselves in that hole,” junior guard Matt Coleman said. “There’s nobody to be mad at but ourselves. It’s a 40-minute game, so we have to do that for 40 minutes.”

With “L-S-U” chants trickling throughout the crowd in a mostly silent arena and a 16-point deficit with less than 15 minutes left, Texas understood the urgent need for a run.

“When you get behind, sometimes you find yourself in a situation of, ‘Hey, there’s nothing left to lose, I’m just going to go after it,’” Smart said. “When our guys lose themselves completely in the fight, in the plan and in each other, that’s when we have that (aggressiveness).”

And so the Longhorns began a no-holds-barred, cut-it-loose run, playing with a sense of reckless abandon and desperation.

They did so by playing how Smart knows best — with a “havoc” defense that Smart made famous in his days as the head coach at VCU but hasn’t yet been seen at Texas this season.

The Longhorns went on a massive 22-6 run over a 10-minute stretch to claw their way back in front for the first time since the 16-minute mark in the first half. It was punctuated by a Coleman three, which gave the Longhorns a two-point lead that nearly blew the roof off the Erwin Center.

“The biggest thing is the mentality and mindset … changed in the second half when we got down,” Smart said. “It’s about the mindset. It’s about how aggressively you play.”

But just as the Tigers had done in each of their last five games, they found ways to make plays late. A turnaround post hook from sophomore forward Darius Days and a transition layup from freshman forward Trendon Watford would put the Tigers back up a pair with less than two minutes remaining.

The Tigers responded by putting the ball in the hands of their best playmaker, senior guard Skylar Mays. Mays dribbled the ball out to midcourt for an isolation play, inviting Coleman to dance one-on-one.

Today, Mays got the best of Coleman. The senior guard took a pair of dribbles, put his head down and drove strong to the rim. The referee signaled for a blocking foul on Coleman, sending the Erwin Center into a frenzy.

Mays calmly converted his free throws to put the Tigers up four with less than a minute left. Following a jumper from Coleman and a quick foul, sophomore guard Javonte Smart would ice the game for the Tigers from the line and give the Longhorns their third straight loss.

With the Longhorns’ season quickly fading away, redshirt sophomore guard Andrew Jones understands the need for a quick turnaround.

“We need to put it all together,” Jones said. “It’s a long season, we still have enough time to flip the script, but we need to do it now.”