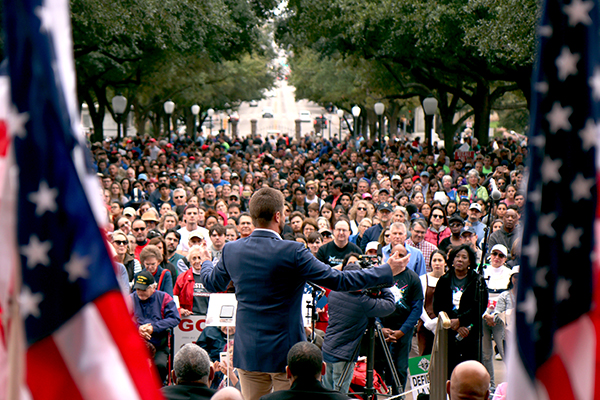 An anti-abortion rally brought thousands of people to march to the Texas Capitol on Saturday, days after the anniversary of Roe v. Wade, the 1973 Supreme Court decision that legalized abortion nationwide.

The Texas Department of Public Safety estimated over 5,000 people were in attendance, as opposed to roughly 1,500 last year. Speakers for the event included state and national representatives, local religious leaders and healthcare professionals. Similar rallies happened simultaneously across the United States, including in Washington D.C. where President Donald Trump gave a speech, the first time a U.S. president has spoken in person at the March for Life rally.

“It is our chance to show the media and our elected officials that Texas values life,” O’Donnell said. “There are so many across the state that have taken part in (rallies) locally and come here on buses to take part. Texas really loves our babies and values life.”

U.S. Rep. Chip Roy said he is attempting to pass several bills to defund and criminalize abortion providers in the U.S. House. The “Born-Alive Abortion Survivors Protection Act” would categorize those born out of an abortion attempt as legally human and criminalize the physician who performed the abortion. The Texas House of Representatives passed a similar bill, “Texas Born-Alive Infant Protection Act,” during the legislative session last spring.

“We want to make sure we are not using taxpayer dollars to convince women to have abortions as opposed to choosing life,” Roy said. “I am supporting the president doing that. Meanwhile, we are going to keep trying to push common sense legislation.”

This rally also comes after a Trump administration decision on Wednesday to refund Texas women’s health programs. The Obama administration removed funding for women’s health in Texas in 2012 after the Texas legislature excluded Planned Parenthood from its Healthy Texas Women program because of the group’s affiliation with abortion providers.

“When I was on the Supreme Court on the steps, I got to join with these pro-life organizations who associate with people who you wouldn’t traditionally consider pro-life people,” marketing senior Guardiola said. “These were people who were also atheists and members of LGBT community, and they were rallying together to support the pro-life movement.”

Joseph McConnell, Longhorn Catholic Council president, said he wants to start a conversation around the issue on campus.

“A lot of people are passionate about this cause,” marketing junior McConnell said. “People should be okay with talking about it, not in an aggressive way, but having open conversations about it and why people should care.”