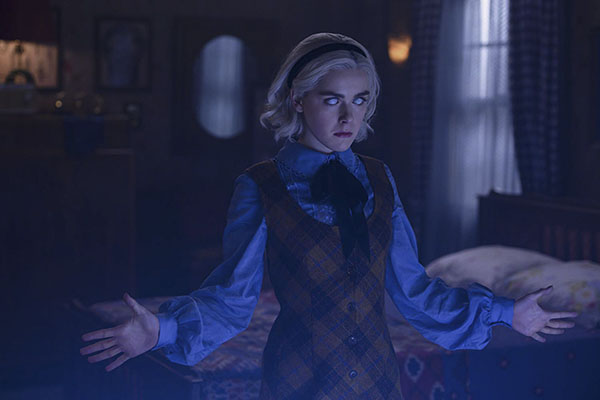 Filled with magic, mischief and — strangely — singing, Netflix’s original “Chilling Adventures of Sabrina” has returned for an action-packed third season.

Sabrina Spellman (Kiernan Shipka) returns as the spunky, stubborn witch she is. This time, she’s tasked with the biggest challenge she’s ever faced: being Queen of Hell.

Similar to the first two seasons, this season follows Sabrina’s attempts to keep a balance between her mortal life and the time she spends at the Academy of Unseen Arts with all of her witch friends. However, her plans are derailed when she is forced to take the position of Queen of Hell.

Now trying to split her time between being a normal teenager, completing her witch studies and reigning over demons, Sabrina’s life is all too confusing.

In the third season, it is mentioned by several characters that their beloved Greendale is located down the road from Riverdale, making it clear that the shows take place in the same universe. The name dropping of Riverdale is abrupt, but mentions of a diner with great milkshakes and the Southside Serpents creates a fun inside joke for those familiar with both shows.

In true “Riverdale” fashion, this season also includes more musical numbers than ever before. In order to try to bring normalcy into their lives, Sabrina and her best friend Roz (Jaz Sinclair) decide to join the cheer team. Instead of cheering, the routines are composed of  musical numbers, which typically star Sabrina and Roz. The performances seems random and terribly unrealistic, but create a stronger connection to its sister town of Riverdale. Ultimately, the musicality doesn’t fit with Sabrina’s aesthetic.

In addition to musical numbers, some new characters have come into Sabrina’s life to make things more complicated, if that’s even possible.

Sabrina’s reign as queen is challenged by the devilishly handsome Prince of Hell, Caliban (Sam Corlett). The underlying chemistry between the two characters drives Sabrina’s quest to keep her throne. Caliban is dangerously charming — enough to make the viewer question his intentions. Their witty banter is refreshing, and their flirty, competitive nature leaves viewers wondering if there’s a romantic future for the pair.

While the preceding two seasons of Sabrina felt like they were trying too hard to be edgy, season three of Sabrina has found its groove. Over the course of the show, the viewer can see Sabrina become more confident in both her magical powers and herself.

With a lot on her plate, Sabrina was in for an intense, jam-packed third season. The plot for this season focuses more on Sabrina’s tasks at hand, delving less into deep topics such as trauma, coping mechanisms and LGBTQ relationships. Although set in the present, the show only scratches the surface when detailing deep topics. They receive very little screen time and not much further explanation. Despite the show not taking a deep dive into these situations, the concepts are still understandable and are not left incomplete.

The third season of “Chilling Adventures of Sabrina” makes up for what it lacks in deep, heartfelt messages with a full, almost confusing plot and intense action.