From the Bahamas to college basketball: Freshman Kai Jones develops potential at UT 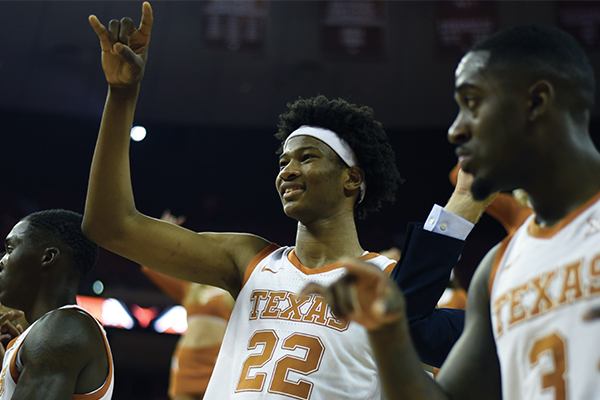 It didn’t take much for Shaka Smart to become enamored with Kai Jones.

After watching film on his phone of the 6-foot-11-inch forward dominating high school games, Smart knew he had found someone special.

“I just saw a guy with incredible energy and what looked like a ton of upside, a lot of potential, a lot of athleticism, and we started recruiting him,” Smart said. “We started talking to him, and it became really easy to tell over the phone that he had just an infectious spirit about him and a really good personal foundation as a person.”

Beyond the basketball talent, what Smart had found was an athlete with a unique journey to college basketball.

Hailing from Nassau, Bahamas, where track and field reigns supreme, Jones found himself following the path of many other top Bahamian athletes.

“I was actually a track athlete to start,” Jones said. “I ran track growing up. Everybody knew me from being a long jumper and high jumper. I was on a few national teams, but I didn’t start playing (basketball) until I moved to the States at age 12 or 11.”

After coming to the U.S. as a preteen, Jones moved back to the Bahamas to further his career in long jumping. A few years later, a natural curiosity and a growth spurt pushed him toward basketball.

“I’d play pickup outside, but I didn’t play any organized ball until I was 15,” Jones said. “When I went back home, I had a huge growth spurt and everybody saw how much better I got, and people started to know me around town as a basketball player.”

As that new identity in a new sport took shape, Jones moved back to the United States to attend both Orlando Christian Prep in Orlando, Florida, and Brewster Academy in Wolfeboro, New Hampshire, to finish out his high school career. The adjustment took time, but in the end, it paid off.

A four-star recruit out of high school, Jones had a choice to make. According to 247Sports, he had accrued 21 offers across the country, including traditional basketball powers such as Georgetown and Kansas. In the end, he landed at The University of Texas and started school in the fall semester of 2019.

Jones’s upbringing in Nassau was not always comfortable. Because of this, he’s grown to appreciate every moment since his arrival in Austin.

As his presence on the team has grown each week, so has his play on the court. Playing only five minutes in the season opener against Northern Colorado, Jones has seen a gradual increase in minutes over the course of the season, culminating in his first career start against LSU last Saturday.

With his tall frame, Jones has the physical tools and raw ability to become a lethal combination of size and skill.

“On film, Kai Jones looks very talented, super athletic, obviously,” said Robert Ehsan, University of Alabama at Birmingham head men’s basketball coach, following an early season matchup against the Longhorns. “I think he’s full of potential. His upside I would think is as high as maybe anyone in college basketball.”

Until he fully realizes that potential, Jones will continue to develop and further his education of the college game. With a supportive coaching staff and his teammates behind him, that may happen sooner rather than later.

“Kai just has to find himself,” sophomore guard Courtney Ramey said. “He’s playing a new position and new spots. Kai is probably one of the best athletes that we have and probably the hardest worker that we have on our team, and he doesn’t know it. Once he figures it all out and his body matures with his game, he’s going to take off.”