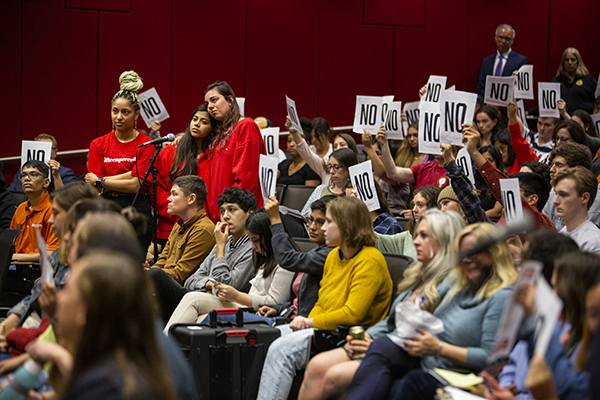 Fenves, along with Maurie McInnis, executive vice president and provost, and Dean of Students Soncia Reagins-Lilly answered student questions at an open forum hosted by The Misconduct Working Group on Monday.

Unsatisfied with “how deeply frustrating and hurtful” Fenves’ initial responses had been, one student said the administration was failing to listen to student concerns.

“You’re not trying to help us. You’re trying to placate us and silence us,” she said. “I just want to see some emotion from you. I just want you to acknowledge that you are failing us.”

The forum was held in response to last semester’s student protests concerning two professors who were found guilty of sexual misconduct. It was meant to be a safe space for students to share concerns and was “open awareness,” meaning the mandatory reporting requirements under SB 212 were suspended. A livestream with closed captioning will be available on the working group’s website.

Over 200 students packed the Belo Center for New Media’s auditorium, and more watched the forum from overflow rooms. Students held up paper signs that said “NO” when they disagreed with a panelist’s response.

“My belief is we don't have faculty in the classroom that students should be scared of,” Fenves said.

Students responded by raising “NO” signs and shouting, “We are.”

Fenves has not attended any of the working group’s meetings. In response to two student questions about his absence, he said he will attend the next meeting.

In 2017, the Office of Inclusion and Equity found that Sarkar violated sexual misconduct policies. An OIE investigation in 2018 found Hutchison failed to disclose a relationship with a graduate student and made inappropriate comments to graduate students.

In November, the University announced the hiring of law firm Husch Blackwell to review its sexual misconduct policies. McInnis said the administration expects recommendations on policy changes by spring break.

At the panel, students also asked about Title IX investigations and navigating what can be a difficult and complicated process. In response to a survivor sharing their story, Fenves said the administration would work to improve the investigation process.

“Our process is failing you,” Fenves said. “We need to fix it.”