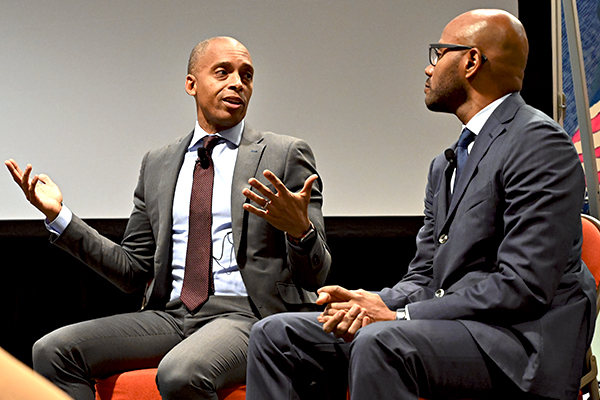 A Harvard professor of history, race and public policy spoke Thursday at the Lyndon B. Johnson School of Public Affairs about the United States’ history of racism and the American educational system’s relationship to white nationalism.

Khalil Muhammad delivered the lecture, which was hosted by Peniel Joseph, a public affairs and history professor, in the Center for the Study of Race and Democracy. Muhammad’s speech, titled “The Descent of Democracy and the Promise of African American History,” was the inaugral presentation of the William C. Powers Jr. Speaker Series.

Joseph said Muhammad is one of the nation’s leading scholars on the function of race in America, with a specific focus on criminal justice and the democratic process.

Muhammad said he believes the right direction to change this pattern is to acknowledge the contribution of Black Americans to the economy, culture and democracy within America. He said Americans must face current and past state-sanctioned violence against Black Americans.

“(We must) embrace the progress from the past history of Black activism,” Muhammad said. “(We have) to accept the past and not become it.”

Muhammad is the great-grandson of Elijah Muhammad, a leader of the African American religious and political movement Nation of Islam, according to The New York Times.

About 50 students, faculty members and members of the public attended the lecture.

Ja’nell Ajani, an American studies graduate student and an organizer at the Center for the Study of Race and Democracy, said she was thrilled to have Muhammad speak at the University.

“He is one of the foremost thought leaders in America,” Ajani said. “He is diverse in scholarship between his work at Harvard, at the Museum of Modern Art and at the Schomburg Center for Research in Black Culture.”

“(Muhammad) is one of my favorite academics,” Yazdanyar said. “It’s important to have speakers like him. These talks are really important, especially in a big public institution and (a) big state like Texas. If we’re going to address race, we have to address our past.”