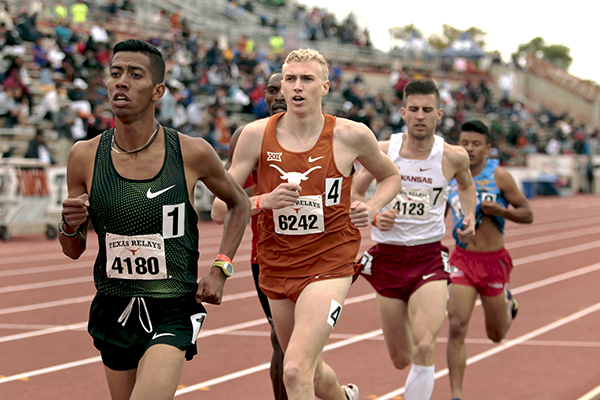 Texas track and field is making a habit of keeping good company.

This Friday and Saturday, the Texas track and field team will compete against a stacked field at the Razorback Invitational after going up against some top competition in last weekend’s meets in Albuquerque, New Mexico, and Boston, Massachusetts.

Both Texas men’s and women’s teams maintained their No. 4 ranking in the country after the first week of competition. Other top teams that are expected to compete in Fayetteville, Arkansas, this weekend include men’s No. 2 LSU, No. 7 Florida and the host, No. 15 Arkansas. The women’s side will prove even tougher with No. 2 Georgia, No. 3 Arkansas and No. 6 LSU competing in the field.

One of the biggest challenges of the weekend could be living up to recent success. Just last weekend in Albuquerque, several Texas athletes posted record-breaking results. Sophomore sprinter Julien Alfred set the bar with the fastest collegiate 60-meter time of the year. Not to be outdone, junior sprinter Micaiah Harris broke the school record in the men’s 200-meter.

Elite times are not much of a surprise considering both runners have eyes on the Olympics this summer in Tokyo, said Floréal. For Alfred and Harris, these numbers are milestones that they look to build on as the season progresses. But those kinds of results put the competition on notice.

“When you’re number one in the world, everybody has a target on your back,” Floréal said about Harris. “Everybody now knows what your name is. You can be successful when you’re unknown. But being successful when everybody expects you to be, that’s difficult.”

Floréal has his eyes on a few athletes that are learning what it means to compete with lofty expectations. Junior distance runner Sam Worley dropped two spots in the men’s mile ranking after not finishing in Boston. Whether or not Worley is able to bounce back from last weekend’s performance is important for building momentum as the season goes on.

Junior thrower Tripp Piperi, the top-ranked shot putter in the NCAA, won his event in Albuquerque with the fourth-best throw of the season in the entire NCAA. He will be looking to continue his performance over the field this weekend.

One of the biggest events to look forward to will be the women’s 400-meter. Sophomore sprinter Kennedy Simon set a new personal-best in the event last weekend and her time currently sits as the second-fastest in the country. The field will feature several of the nation’s top sprinters, including No. 5 Morgan Burks-Magee, a junior from Arkansas.

Texas’ athletes are no longer flying under the radar. In another weekend against elite competition, the top-five rankings are not just for show. They’re something to prove.