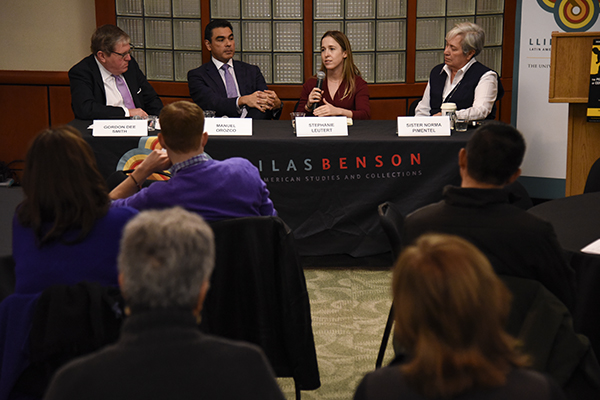 Panelists discussed the state of emigration from Central America during a panel presented by the Cátedra Ernesto Cardenal, a UT initiative which sponsors an annual event highlighting Central America.

Speakers included Stephanie Leutert, director of the Mexico Security Initiative in the Robert S. Strauss Center for International Security and Law, and Manuel Orozco, director of the Migration, Remittances and Development Program at the Inter-American Dialogue, a nonprofit that supports democracy in Latin America and the Caribbean.

“The history of the world is migration,” said Gordon Dee Smith, panel facilitator and advisory council member of the UT Teresa Lozano Long Institute for Latin American Studies and the Benson Library. “You will never stop migration, period,” said Smith.

Leutert said those who decide to make the journey from Central America through Mexico decide whether or not to hire a smuggler, referred to as “guides,” which can cost between $5,000 and $8,000.

These community members take migrants across the river into Mexico and transport them in a taxi to pass state police checkpoints. Leutert said people who speak indigenous languages generally do not follow the same transit paths because they need different guides.

“Every step of the way at a local level, there are people making money at each stop, and they’re all involved in the community,” Leutert said.

Orozco said migration can affect well-being, as families do not know when they are going to reconnect. However, economic reasons urge Central Americans to make the journey to the U.S., Orozco said.

The pull factor of job availability within the U.S. and the push factor to seek higher paying jobs are examples of globalization, Orozco said. Immigration reform should focus on developing Central America.

“Whatever we try has to be rooted in a more local way,” Orozco said. “If we don’t address the problem in the original country with the problem, nothing will change.”

Emma Kyme, international relations and global studies freshman, said she attended the event for extra credit in her Introduction to International Relations and Global Studies class.

“It really shed a light on the immigration issue that the media doesn’t cover and what I previously didn’t know from textbooks or anywhere else,” Kyme said. “I like how it covered the whole situation, the paths they take and the difference in routes.”