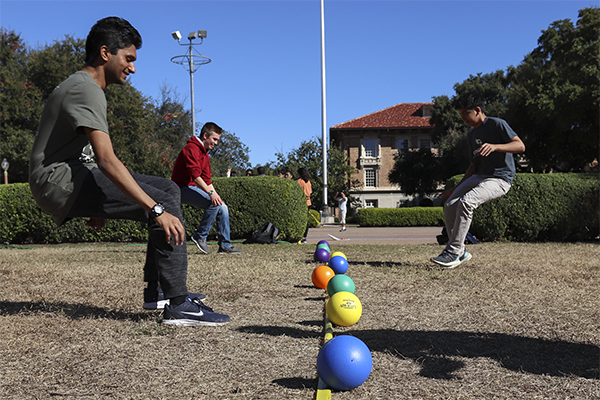 The Hindu Students Association hosted their annual Sankranti festival Saturday at the Main Mall, focusing this year on mental health awareness with their theme, “Always Forward.”

Sankranti is a Hindu harvest festival dedicated to a God of the sun, Surya. Celebrating the northward movement of the sun into the constellation of Markara, or Capricorn, the festival symbolizes rejuvenation and fresh beginnings with the start of a new season. Students flew colorful kites, played dodgeball and learned about mental health awareness at various booths.

Event co-chair Abhay Ram wanted to incorporate the theme of mental health awareness to start the semester off positively.

“Whatever happened last semester or whatever is going on, start this semester fresh,” said Ram, an arts and entertainment technologies junior . “If there are any New Year’s resolutions that you made or better habits that you want to take with you going forward, keep those in mind and try to work on ourselves and we can all kind of grow together.”

One booth at the center of the festival was a bonfire where students wrote down bad habits they wanted to overcome and threw them into the fire.

“(In Hinduism) fire is sort of like a purifying agent and the light the fire emits represents knowledge, removing darkness in general,” Ram said. “But it’s also supposed to burn away negativity.”

Biochemistry freshman Stephanie Nuñez said the bonfire was her favorite activity at the event and believed that the event’s message was important to share.

“It’s really important to have those conversations (about mental health) in several spaces … to normalize talking about it and having that be a part of the daily conversation,” Nuñez said. “It’s really comforting and nice to see that organizations in the University have initiatives to focus on it.”

Editor’s Note: A source has been removed from this story due to extenuating personal circumstances.