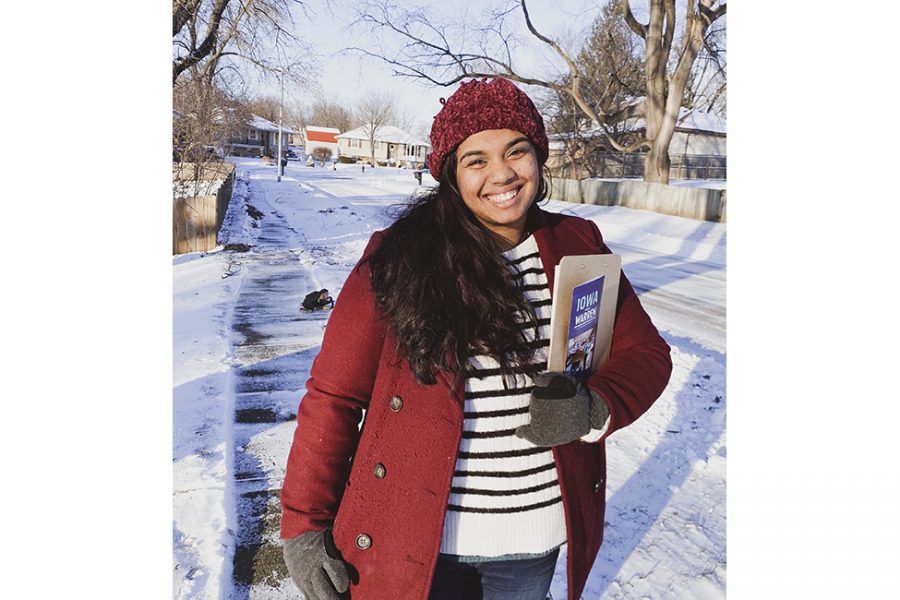 What started as a typical day block walking and canvassing for the Iowa caucuses resulted in saving a life, a phone call from Sen. Elizabeth Warren and a lifelong friendship.

Government junior Parisa Mahmud traveled to Iowa over winter break to canvass for the Warren presidential campaign with college students from all over the United States. While knocking on doors in Polk City, Iowa, Mahmud stopped Iowa resident Carly Routh from attempting suicide.

Mahmud had only three houses left to canvass for the day. She was planning to stop by a house further away, but instead, Mahmud decided to ring Routh’s doorbell first.

“Something in me was like, ‘I don’t really want to walk that way right now, so I’ll just hit this house,’” Mahmud said.

After beginning her usual conversation about the Warren campaign, Mahmud noticed something wasn’t right with the woman who had opened the door. Routh’s breathing was abnormal and her responses seemed erratic, Mahmud said.

Routh has veteran PTSD and anxiety. On that day, she decided she was going to take her own life.

“(That day) I made a decision that I (couldn’t) get through (the day),” Routh said. “When I got to that thought process, in that very second, is when my doorbell rang.”

Mahmud sat inside with Routh for 30 minutes until one of her friends arrived so she would not be alone.

“If Parisa had not been at my house at that exact moment, I would not be here today,” Routh said. “Whatever you want to call it — fate, the universe — she was there at the exact moment that I needed her most.”

Mahmud had been trained through the Counseling and Mental Health Center Peer Educator Program for three semesters prior to her trip to Iowa. Mahmud said personal experiences and official training about mental health awareness gave her the guidance to handle this situation.

At the nightly debriefing, Mahmud shared this story with her fellow campaign staffers.

“There couldn’t have been a better person to knock on Carly’s door that day,” said Caroline Bollinger, a campaign staffer from Mahmud’s team.

When an unfamiliar number called Mahmud, she almost didn’t respond. She assumed it was a telemarketer, but when she picked up, it was Elizabeth Warren calling to thank her for her courage in that moment and her dedication to the campaign.

After receiving the call, Routh and Mahmud’s canvassing team in Iowa encouraged her to share the full story on Twitter. Shortly after sharing, it went viral on Twitter.

“Parisa, I think about you every single day! I am so incredibly thankful that you knocked on my door and the exact moment you did otherwise I would not be here,” Routh tweeted. “I am so thankful for your grace and love and kindness during one of my darkest moments. Everything happens for a reason!”

Nearly a month after their meeting, Mahmud and Routh continue to stay in touch through Snapchat and occasional FaceTime calls.

Mahmud said she is taking this experience to strengthen her mental health advocacy and be an active bystander in future situations.

“All these people are calling me a hero, but I don’t really see myself as that,” Mahmud said. “I keep saying to people I hope that anyone would do what I did in that situation.”