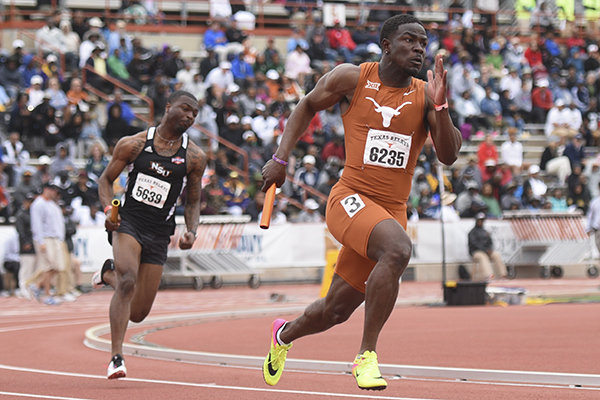 The Longhorns are returning to Austin with seven individual event victories, two new school records, a relay victory and a men’s team championship.

The men secured their win in dramatic fashion by winning the meet’s final event — the 4×400-meter relay. The team, who consisted of junior Jon Maas, sophomore Jonathan Jones, junior Micaiah Harris and freshman Moyo Oyebamiji, clinched the victory with a time of 3:07.85, logging fourth in the NCAA this season. With a 0.22 second victory over Florida in the last event of the weekend, the men’s squad finished with 79 points to claim the title, with Oregon (75) and Arkansas (73) rounding out the top three.

With 70 points after two days, the women finished third in the team rankings, behind Florida (79) and dominant LSU (96).

Harris continued his dominant streak and clocked in at 20.49 seconds in the 200-meter dash. With this time, he improved his school-record and 2020 world-leading time of 20.53 seconds that he ran last week. The women’s distance medley relay team finished fourth in the event with a time of 11:04.31 — over six seconds faster than the previous school record.

The Longhorns swept the 400-meter dash event with victories from Jones on the men’s side and sophomore Kennedy Simon on the women’s side. Edging out second place by half a second, Jones finished the race in 46.04 seconds — putting him at third in the NCAA this season. Simon won the event with a new personal best of 52.20 seconds that currently leads the NCAA for the 2020 season.

Junior Tripp Piperi, the reigning NCAA outdoor shot put champion, claimed victory in his event this weekend with a distance of 20.20 meters — over a meter further than second place. This marks Piperi’s fourth-best distance of his indoor collegiate career. As Piperi trains to prepare for a potential berth at the U.S. Olympic trials, Texas head coach Edrick Floréal noted the importance of not overusing that arm.

“He has a legitimate chance,” Floréal said. “So if he throws 15 or 20 meets in college, he’s not going to have an arm left to make that team.”

Making his triple jump debut for this indoor season, senior O’Brien Wasome won out over the field, clearing 16.38 meters to claim the second spot in the NCAA this season. Wasome’s jump helped lead the charge for a Texas team that has vaulted itself into the conversation as one of the country’s top teams.

“There’s no place like Texas,” Floréal said. “The pressure to wear that uniform, the expectations that come with doing it, not everyone is going to want to embrace that.”