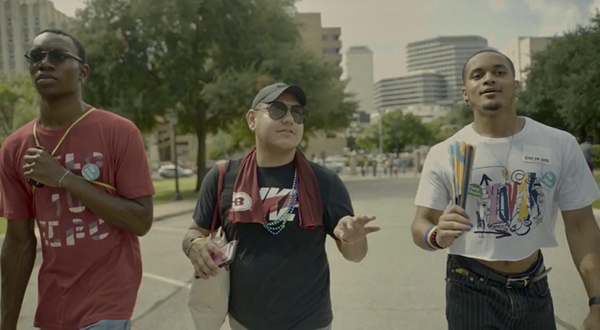 Malik Julien made his first film at the age of 6. After reluctantly asking his mom for permission, she said, “Okay, let’s do it.”

“In my mind I’m thinking she’s probably going to be like, ‘No,’ and I was just ready for that defeat,” Julien, a radio-television-film sophomore, said. “That honestly was the moment that pushed me to become the filmmaker that I’ve always aspired to be.”

Years later, he has dedicated his life to telling other people’s stories through his camera lens.

After working on other short films and documentaries, Julien began creating a documentary called “And They Were Loved.”

Julien said his film came to fruition after he began searching for sources who would be willing to share their stories about being a person of color in the LGBTQ community.

Julien identifies as queer, Black and Christian. He said that the way he identifies has allowed him to see things differently.

“My identity is radical in itself and I am starting to really realize that,” Julien said. “I 100% acknowledge the suffering that the church community has caused upon the LGBTQ community, which is why I feel like if I am seeing these problems I have to do something about it.”

“Malik is such a caring guy,” Mpeye said. “He always wants to make sure that you’re taken care of, (he’s) always checking up on you. This documentary gave me a space to just be more of myself.”

The documentary follows the three LGBTQ men of color, each one with a diverse range of experiences. Julien said he hopes that in sharing their stories, a voice will be given to issues within the Black and brown LGBTQ community, such as living with HIV.

“I’ve been doing a lot of HIV advocacy work for a few years now,” Ramos said. “I’m living with HIV. It’s been a crazy roller coaster from when I got diagnosed to now being in the position that I am in. I have spoken on a global, state and national level regarding HIV advocacy.”

The film takes place in Austin, San Antonio and Denison, and highlights the experiences of each subject in their search for a chosen community. Bearden said throughout the project he was forced to come face to face with the negative impacts of stereotypes against Black men.

“During the more personal times, it was sometimes overwhelming because for the documentary, I wanted to be true to myself,” Bearden said. “Once you try to forget something I feel like you really push it down. Bringing it back up just comes up with all those memories and feelings that happened in the moment.”

“And They Were Loved” is set to be released Feb. 15. The film was recently awarded a $4,000 grant by the CEO of an Austin-based organization called What’s in the Mirror as part of their Art Heals project, which aims to help further expose the documentary to youth in the LGBTQ community.

Ultimately, Julien’s goal is for people to see themselves in the film.