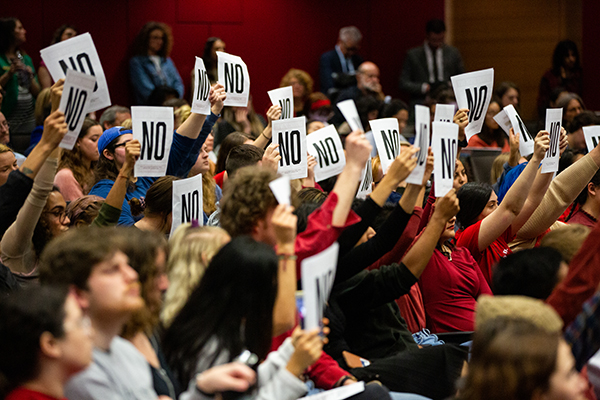 Student members of the Misconduct Working Group said their voices were overpowered and their ideas ignored during meetings to plan a forum about sexual misconduct on campus.

The group was formed after months of student protests against the continued employment of UT faculty found in violation of sexual misconduct policies. One demand of protesters at the time was a town hall on sexual misconduct. That forum was held Jan. 27.

Tasnim Islam, a Misconduct Working Group student member, said she was frustrated with the group while planning the forum.

“It was all done with good intentions,” said Islam, a Plan II and women and gender studies sophomore. “But it has been very difficult to feel like the time that we’re spending together is valuable time.”

Students and administrators disagreed on the logistics of the forum, such as the size of the venue, the presence of police and how the forum would be moderated, Islam said.

“From the very beginning, we fought for the large spaces like the Bass Concert Hall,” Islam said. “It went from 50 people allowed in a room to 300 (at Belo), which was a small win.”

The forum took place in the Belo Auditorium at the Belo Center for New Media, which seats 295 people. There were also two overflow rooms containing at least 30 people in each room. Bass Concert Hall seats 3,000.

Student protest organizer Lynn Huynh said there was miscommunication between the administration and the student members about whether there would be police present at the forum.

“From the very beginning of us organizing this town hall to literally the day before, we were promised there would be no police,” said Huynh, an advertising and women and gender studies junior. “Student feedback was not taken seriously.”

According to a statement from media spokesperson J.B. Bird, student input was considered, such as the page of information and student demands handed out to audience members.

“It was difficult to come to a complete consensus on all details, but the working group considered and responded to all input to achieve the event objectives,” Bird said.

The page handed out to attendees also contained a large “NO” on one side of the sheet. Huynh said she designed this based on advice from community groups as a way to express disagreement with the administration.

“(We wanted) some way to visually voice dissonance and disagreement with whatever the people on stage would say,” Huynh said. “We don’t have to just sit there and listen to administrators and just take what they’re saying.”

Islam said she was surprised when students started raising the sign on their own.

“We didn’t even have to tell the students to raise them up, we just passed out the flyers,” Islam said. “After the very first question, all the ‘NO’ signs went right up. It was beautiful to see.”

Huynh said the forum was a step in the right direction, but more action is needed from the University. At the forum, UT President Gregory Fenves committed to attending the next meeting of the Misconduct Working Group on Feb. 13 after students questioned his absence at previous meetings.

"I’m not happy with the administrators’ responses,” Huynh said. “There’s still so much work to be done. This is something people are still talking about, including administrators, including Fenves.”