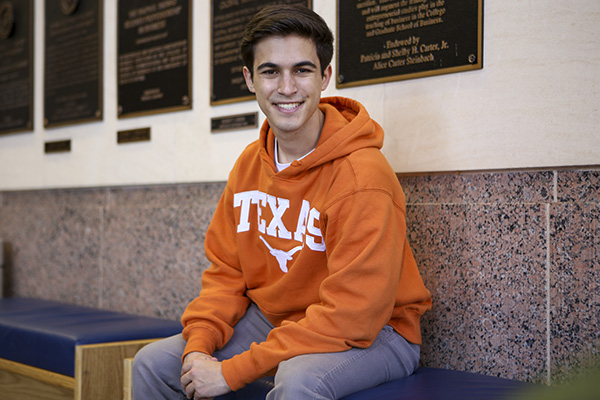 Growing up, business sophomore Marshall Comeaux used to shout answers at the TV while watching “Jeopardy!” This spring, he will compete on the show with 14 other university students across the United States for a $100,000 grand prize.

“That’s really where I got the inspiration,” said Comeaux, a Plan II, finance and business honors sophomore. “Watching it with my grandmother and my family growing up was an incredible motivational factor for me.”

Comeaux said he decided to try out after his friend sent him a link to an Instagram post about college “Jeopardy!” auditions last September.

“Those who pass the test are randomly selected for in-person auditions,” Alison Shapiro Cooke, “Jeopardy!” director of communications, said in an email. “In-person auditions consist of a second test … and some quick interview questions.”

He was interviewed by producers and played mock “Jeopardy!” games during the audition. Comeaux said he froze up when the producers asked him what he did for fun.

“I paused for about 30 seconds then and, in possibly one of the most embarrassing moments of my life, I told them that I did investment banking for fun,” Comeaux said. “Which is not what I do for fun, I promise.”

Over winter break, he received a call stating that he was one of the 16 people, including 15 contestants and one alternate, who were chosen to compete. During the first week of February, he filmed 10 episodes over the course of two days in California and got to know the other contestants, Comeaux said.

“We’re all amazing friends now,” Comeaux said. “We went out Tuesday night … on the Hollywood Walk of Fame and got milkshakes.”

Nicholas Marchenko, business honors and finance junior, said he knows Comeaux through UT organization University Securities Investment Team and has served as Comeaux’s mentor. Marchenko said he’s observed Comeaux’s intelligence, creativity and communication abilities during the time they have worked together and was not surprised when Comeaux announced that he was applying for “Jeopardy!”

“He’s not a stranger to trivia, and (he is) a really bright guy,” Marchenko said.