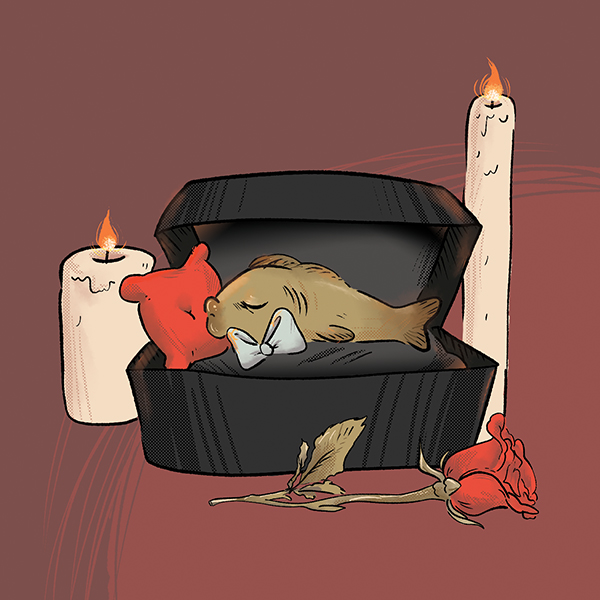 When Loompa the mosquito fish arrived on campus with Paige Stetson in August 2019, he was just another fish in the sea. Now, Loompa is swimming among viral videos and international attention.

Loompa, survived by his brother, Oompa, died over winter break while in the care of one of Stetson’s friends. While it initially started as a joke, Stetson and her friends returned to campus, removed Loompa from the frozen pen box he had been placed in and began planning a funeral.

The funeral took place Saturday, Feb. 1 in the Honors Quad Courtyard and roughly 275 people attended, with even more tuned in to the Twitch livestream.

“Right after we put up the flyers, there were people talking about it everywhere like, ‘Oh, there’s a girl who lives in Blanton whose fish died,’ and it’s like, ‘Oh, that’s me,’” said Stetson, a plan II and neuroscience freshman. “It was kind of interesting to hear the kind of commotion it caused.”

Stetson’s RA, business and math sophomore Robert Deacon, organized the event and even got funding for the funeral from the University after the event was approved by University Housing and Dining. Deacon said in order to receive funding, the event had to have an educational aspect.

“The lesson (plan) to be taught alongside Loompa’s death was that we would learn how to grieve,” Deacon said.

The group was given $75 for the funeral, which was spent on Swedish Fish, Goldfish and Mountain Dew. These were Loompa’s favorites, said Janelle Mendoza, a studio art freshman who helped organize the event.

The funeral included multiple eulogies and performances, such as a rendition of Lady Gaga and Bradley Cooper’s song “Shallow,” performed by biochemistry freshman Jaden Salvatus.

“(The lyrics) said ‘Tell me something Loomp/ Sorry you died in this world of doom/ Look around you’ll see all these people here who love you fishy,’’’ Salvatus said. “I may not have reached the high notes, but I think I reached Loompa’s heart.”

Salvatus said he arrived late to the funeral and was shocked at the number of people he saw there.

“Walking in through these gates I just saw a huge crowd of people dressed in black,”  Salvatus said. “That’s when I found out this was way bigger than expected.”

The funeral also included a rendition  of “The Eyes of Texas,” instead renamed “The Eyes of Loompa.” Loompa was carried in a casket made of a pen box and chopsticks and cremated in a grill rather than buried.

“When we lit the fire, ‘See you Again’ by Wiz Khalifa started playing and everyone sang along to it and waved their phones back and forth,” Mendoza said. “I thought that it was a magical display of solidarity amongst everyone.”

Economics freshman Lana Murphee helped plan the event and said it made her happy to see the UT community come together.

“I’m glad that we could get UT funding for something some people may say (is) weird, but ultimately awesome,” Murphee said. “I can’t wait to tell my kids this story, they’ll probably be sick and tired of hearing it.”