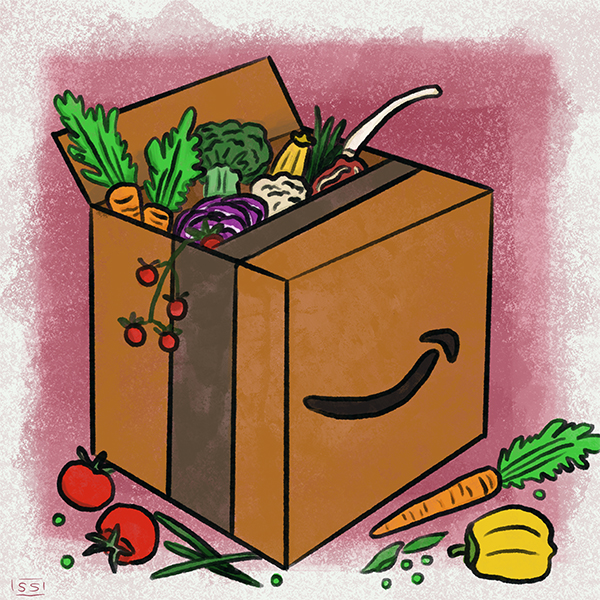 Amazon Fresh launched in Austin last Thursday, allowing Amazon Prime members to ship groceries to their door in two hours with no delivery fee with a purchase of $35 or more, according to a statement from Amazon.

Now, Whole Foods Market and Amazon Fresh groceries are available for those in Austin, so students in apartments can deliver products to their homes, according to the statement. Shipments to dormitories are not allowed, according to Amazon’s website.

Psychology sophomore Katerina Mangini said she thinks the service will save her time and money.

“It will cut down the time that students would be taking to (the) grocery shop,” Mangini said. “It would also be helping because a lot of students don’t have cars, so they won’t have to pay for transportation.”

Mangini said some of the closest grocery stores are about a 10-minute drive away but are longer on a bus or bike. She said the commute dissuades students from going to the stores.

“There’s also the Target on (Guadalupe Street), but I never go there (because of limited) produce,” Mangini said.

Mangini said a lot of her friends don’t cook because it takes a lot of time and they don’t know what to look for at grocery stores.

“(Amazon Fresh) might encourage people to cook more if they don’t do that a lot,” Mangini said. “It will help, especially if you can … order your groceries while you’re walking to class and then by the time you’re home they’re there.”

Art history freshman Janet Rasmussen, who lives in Jester West, said she wishes Amazon Fresh would deliver to dorms so she could cook more.

“Me and my roommate eat so much in our dormitory,” Rasmussen said. “When it is late at night you can’t go to the dining hall, and you don’t want to walk at night here so it would be very convenient to be able to use (the service).”

Accounting sophomore Kevin She, who prepares his meals in advance for the week, said he is wary of grocery delivery services like Amazon Fresh.

“(At the grocery store) you pick up an apple and look to make sure there aren’t any bruises,” She said. “You don’t have that personal guarantee when someone else is picking out fruit or vegetables for you.”

She said he has used a grocery delivery service before through H-E-B and experienced trouble although the list was largely basic produce.

“They forgot an item at the store ­— they forgot my milk,” She said. “It was a huge hassle because my delivery person had to call back at the store, but there was no one working because it was near closing time. And they never got my milk.”

As more grocery stores launch their own apps, She said grocery delivery will become more commonplace.

“I for sure think people will start ordering more from these online apps … and in a few years, it’s just going to be the norm,” She said.