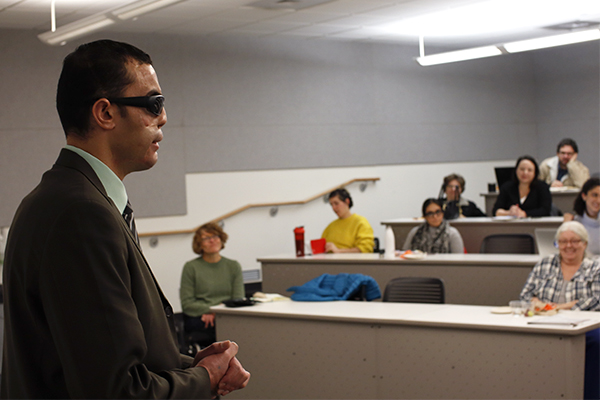 A UT student shared his life story as a disabled refugee through a documentary viewing as part of the Disability Awareness Speaker Series on Tuesday.

Qusay Hussein, a psychology and social work junior, spoke about the documentary “Open My Eyes: The Extraordinary Story of Qusay Hussein,” which was produced by Doctors Without Borders, an international medical organization. The documentary chronicled his life as a refugee, and he answered questions following the screening.

Hussein became blind as a result of a suicide bombing in Mosul, Iraq, at age 17. He later applied to be a patient in Jordan with Doctors Without Borders. Following his treatment, Hussein was sent to Austin based on his medical condition.

Hussein said he hopes to become a psychologist to help people who have been traumatized.

“I would like to talk about ourselves as humans and how we think and how we should love each other,” Hussein said. “We should not discriminate when we see someone different … (who) is not part of society (or has a disability).”

Hussein said intimate relationships affect our personal happiness and our ability to help people. During his own treatment, he formed close relationships with the doctors and patients around him.

“Don’t isolate yourself,” Hussein said. “When I came here for 21 days, I didn’t see people and I felt tired and I didn’t want to be in the U.S. anymore. Isolation kills people.”

Event organizer Nick Winges-Yanez said the goal of the series is to reach out to people at UT specifically because it affects people at UT.

“(The intention of the series) is really just to raise awareness (about issues) that people might not be aware of in the disability world,” Winges-Yanez said.

Winges-Yanez, an adjunct assistant professor at the Texas Center for Disability Studies, said the speaker series focuses on disability studies as a methodology, the immigrant experience with disabilities and people’s experiences with doctors.

Abby Attia, a global policies studies and Middle Eastern studies graduate student, was excited to hear about the event and watch the screening.

“I (was) excited to hear from a refugee’s perspective the challenges they face from having a disability,” Attia said. “I study international development, and I think that a lot of times people with disabilities aren’t taken into account with policies. I’m excited that this perspective has been documented.”