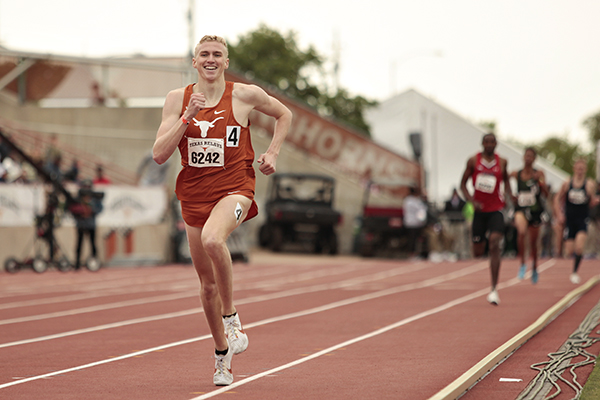 Leo Manzano was just waiting for his moment.

After remaining in the middle of the pack for most of the race, the former Longhorn unleashed his ferocious kick to win a hard fought silver medal in the 1500m Final at the 2012 Summer Olympics in London.

In just a matter of minutes — 3:34 to be exact — Manzano ended a 44-year-long podium drought for U.S. men’s middle-distance running with his runner-up finish.

Five years later, the Olympian and five-time NCAA Champion placed third in the Jerry Thompson Mile at the 2017 Texas Relays, behind a high school senior bound for the Forty Acres that fall. The race, which Sam Worley won in four minutes flat, was a passing of the torch of sorts from one great Texas distance runner to the next.

Worley, now a junior at Texas, is a different kind of runner than Manzano. He doesn’t have the Longhorn legend-turned Olympian’s signature kick, but the New Braunfels, Texas, native runs with a special kind of grace. When Worley records some of the fastest times in the NCAA, he makes it look smooth and effortless.

But the comparison of the two men isn’t to crown one over the other — it’s to create context. Manzano was a champion on the national and world stage, and everything Worley has done up to this point is the making of another Texas track and field success story.

Aside from his memorable Texas Relays performance, Worley took the high school running world by storm as a senior. In fall 2016, he won a state championship in cross country, and the following spring, he won both the 800 and 1600-meter run titles in speedy fashion.

Worley’s only gotten faster since coming to Austin.

When Worley was a freshman competing at the Husky Classic indoor meet in February 2018, he broke the four-minute mile barrier for the first time in his career.

Then, one year later at the same meet, he did it again. Except that time, Worley ran a 3:57 to win the race and ascend to number one all-time over Manzano and his former teammate Alex Rogers in the Texas record book. His mark was also the No. 1 time in the NCAA at that point in the season.

“It’s special,” Worley said last year at the Texas Relays on his sub-four mile times. “It’s something I’ve been chasing since high school. Just to capture that barrier is big, but at the same time it just makes me want to go faster.”

The middle-distance phenomenon also stars in cross country. While running is very much an individual sport, Worley’s All-American performance in the 2019 NCAA Cross Country Championships propelled the Longhorns to a 25th place finish, their highest since 2013.

“Sam executed his race plan almost perfectly and walked away with his very first All-American award in cross country,” Pete Watson, Texas men’s distance coach, said after the championships. “He finished about a hundred places better than last year.”

Is Worley bound for the 2020 Olympics or future games? In a sport decided by “good” and “bad” days — and sometimes hundredths of a second — not even he could tell you that.

“Just making the Olympics would be a dream,” Worley told Fox San Antonio in May 2017. “I have had a lot of people tell me I could make the Olympics, but I don’t think about it. Nothing is guaranteed in this sport.”

Olympics bound or not, keep an eye on Worley as Texas’ indoor season heats up and the outdoor season kicks off next month. Manzano passed Worley the torch in 2017, and he’s been running fiercely with it ever since.