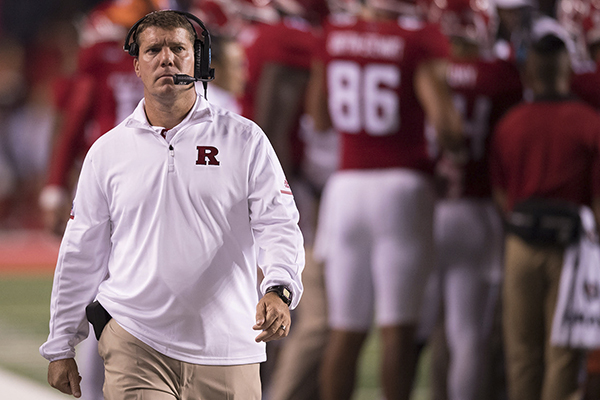 Despite coming off of a Sugar Bowl victory against Georgia from the year prior, Texas had a disappointing 8–5 campaign in 2019.

It was clear that many of Texas’ struggles stemmed from the defense, and head coach Tom Herman appeared to agree as he fired defensive coordinator Todd Orlando after the final regular season game. To replace him, Herman brought on former Rutgers head coach Chris Ash as one of the co-defensive coordinators for the 2020 season.

Ash began his coaching career in 1997 at his alma mater Drake University. Many years later, in 2009, he and Herman worked together for the first time at Iowa State. Ash then went on to become the defensive backs coach and defensive coordinator at Wisconsin before moving to Ohio State with Herman in 2014. There, the two went on to win the first-ever College Football Playoff as offensive and defensive coordinators for the Buckeyes.

After the 2015 season, Ash left to become the head coach of Rutgers University, where he would go 8–32 in three and a half seasons. He was let go four games into the 2019 season after the Scarlet Knights were outscored 112-16 in only three conference games — not a compelling scoreline to boast as a defensive coordinator candidate.

The base defense Ash ran at both Ohio State and Rutgers is commonly called a 4-2-5 quarters coverage. The 4-2-5 refers to the formation both teams ran, with four down defensive linemen, two linebackers and five defensive backs. Quarters coverage is the style of coverage played.

Pre-snap, we see two deep safeties, two corners, a nickel back playing down on the slot receiver, four down linemen and two linebackers hovering over the line. In quarters coverage, each of the five defensive backs will play defense differently based on certain keys.

We can see the corner on the short side of the field pressed against his man. If this wide receiver does anything other than a quick release inside, it will be this corner’s responsibility to cover him with emphasis on not getting beat deep along the boundary. Along the boundary is the deep outside quarter this corner is responsible for on paper. The principle keeping the corner from being responsible from a quick inside route like a slant or a drag is called “bracket coverage.”

Bracket coverage is heavily utilized in Ash’s quarters coverage and many other zone coverages at the highest levels of football because of its effectiveness against modern passing schemes.

We see in this play that once the short-side linebacker confirms the play is not a run, he makes a quick glance to his right to check for a shortcut by the wide receiver, who he would play man against on a slant or a drag. Instead, the linebacker sees that the receiver has gone downfield past him, so he instead matches up with the running back headed out to the flat. On the opposite side of the field, the outside corner, deep safety and nickelback will also be bracketing. When the outside corner sees the outside wide receiver release fast and upfield, this receiver becomes the corner’s responsibility for the rest of the play, with added emphasis on protecting his deep quarter.

One of the strengths of quarters coverage is that the assignments of the nickelback and safety make it highly effective against the run. Nine guys can stack the box, and the nickelback can jump the screen without leaving his assignment.

With all its strengths, Ash’s coverage is not without its weaknesses.

One very prominent weakness in quarters coverage is the vulnerability of the deep quarters along the sidelines if the corners are severely outmatched by opposing receivers. In the three conference games from Ash’s 2019 campaign, this weakness gave rise to most of the points they gave up. These games were like watching opposing teams’ highlight tapes as corners repeatedly got burned for deep touchdowns. It even happened in the above example, where the outside corner simply stops running on a double move and is torched for a 53-yard touchdown.

The good news for Texas fans is that this wasn’t an issue when Ash ran this coverage at Ohio State due to the top-class recruiting there, and for the same reason it likely won’t be a problem at Texas. In fact, quarters coverage should compensate for many of the issues created by Orlando’s scheme, such as frequently calling Cover 2 only to give up long touchdowns to plays with three deep routes. Having four down linemen should also eliminate the need for the frequent overload blitzes that Orlando ran to try to apply pressure to opposing quarterbacks.

While the Texas defensive players may take time to settle into this complex scheme, Ash should be a great hire in the long term. Ash’s scheme should play well in the Big 12 on paper, and it is clear that Ash did an excellent job in coaching the complex rotations and responsibilities of this scheme.