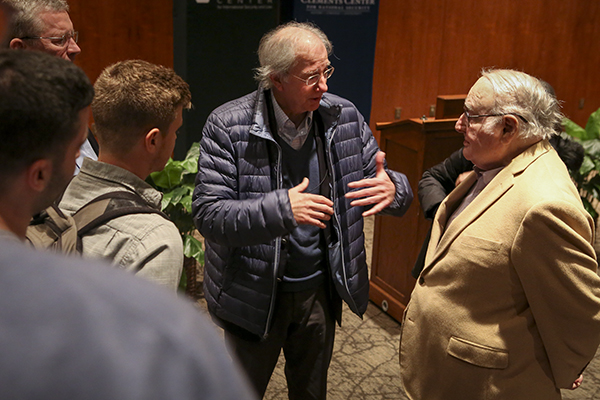 Ambassador Dennis Ross, former special assistant to former President Barack Obama, spoke to students and faculty about his book “Be Strong and of Good Courage: How Israel’s Most Important Leaders Shaped Its Destiny,” on Wednesday.

The recently published book is a political commentary about Israel’s leaders and the Palestinian-Israeli conflict.

“The title is basically referring to two things: first Israel has to be strong, but Israel also has to be wise,” Ross said. “If Israel stays on the path it’s on, it will become one state for two people.”

Ross is well known for his foreign policy work during the Bill Clinton administration, during which he said he played a pivotal role in securing the acceptance of the Clinton Parameters. The parameters were a basis for further negotiations between the Israelis and Palestinians, Ross said.

During the talk, Ross shared his thoughts on President Donald Trump’s peace plan, a recent proposal aimed at resolving the Palestinian-Israeili conflict.

However, Ross praised the Trump administration for calling the peace plan a vision rather than a set plan. Ross then emphasized the importance of establishing a four-year window for further negotiations.

Patrick O’Connor, a government and international relations and global studies sophomore, decided to attend because he is interested in national security, intelligence and diplomacy as a career path.

“(Ross) is bringing a lot of information in regard to Middle Eastern policy, foreign policy with the U.S., as well as his past peace discussions with the Soviet Union,” O’Connor said. “This relates very well with what I want to do. I could see myself going into the state department or perhaps one of the intelligence agencies.”

The Clements Center for National Security and the Robert Strauss Center for International Security and Law hosted the talk with Ross and holds several guest speakers throughout each semester. These events offer students who are interested in diplomacy and foreign policy the opportunity to hear from and engage with experts in their areas of interest and research.

Government junior Eduardo Flores wanted to hear from Ross because he wants to learn more about current events related to government.

“I want to get to know more about international affairs and see the state of national defense,” Flores said. “I came here mainly to be more informed about topics such as (foreign policy).”