No. 7 Texas women’s tennis set to takeoff against Air Force 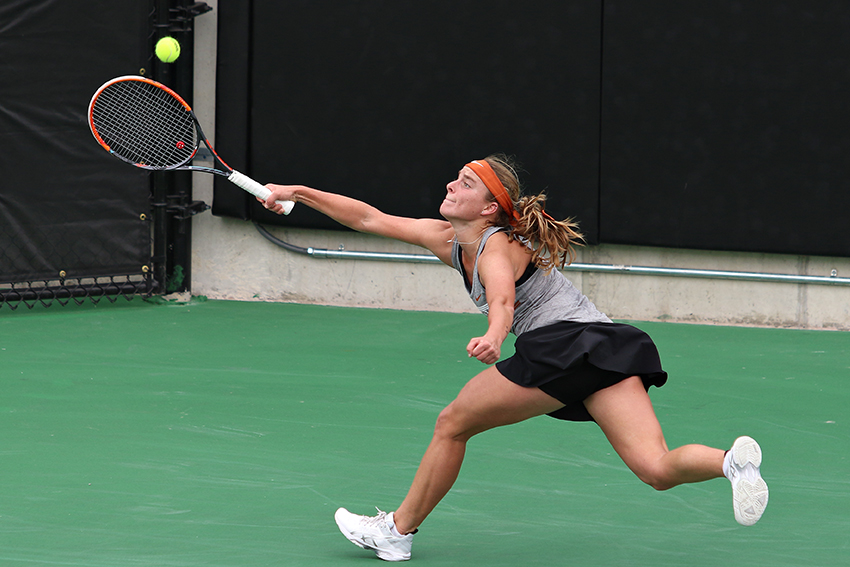 Following a disappointing first round exit in Chicago at the ITA National Team Indoor Championship, the 6—–1 Longhorn women’s tennis squad is set to pick up some momentum in its return to the Forty Acres. Its first test is against a 4–2 Air Force team looking to hold its own against its first ranked opponent this season on Thursday.

The No. 7 Longhorns look to get back on track with a victory against the Falcons, as they were handed their first loss this past weekend at the ITA National Team Indoor Championship in a 4-3 upset loss to No. 9 Florida State.

Texas was able to quickly recuperate following the loss, and handily took down tournament host Illinois 4-1, then later went on to beat No. 12 Ohio State. Now playing back in Austin for the first time in almost a month, the Longhorns are looking to avoid any signs of jetlag against a rested Air Force squad.

Coming off a tough 4-3 loss to Nebraska, the Air Force Falcons are led by the current back-to-back Mountain West Tennis Player of The Week, senior TJ Fumagalli.

Despite sitting comfortably above the .500-mark, the Falcons still have much to prove against the No. 7 Longhorns. The Fumagalli-led Falcons are coming into Austin with both their losses coming on the road. Their only win away from home came against an unproven Creighton squad.

But while the Longhorns will be playing their fourth match in a week, Air Force is fresh off a 12-day break between matches.

“Anytime that we play a Top-10 team, we’re gonna have to do the basics really well,” Air Force head coach Kim Gidley said. “If we can show them who we are, what we’re about, make a statement. We’ve never played the University of Texas.”

While Fumagalli brought in Mountain West honors, members of the Longhorn squad are no stranger to conference-wide recognition, as senior Bianca Turati has also received back-to-back conference honors. With Turati earning her seventh Big 12 Player of the Week award of her career, she is now tied with former Baylor player Zuzana Zemenova (2005-2008) for the most selections in Big 12 history.

“To me, what was impressive is that she played a style of tennis that was more purposeful,” Texas head coach Howard Joffe said regarding Turati’s fall season. “In the past, she’s been more risk-averse, but in Malibu she played tennis that was free and it showed.”

Even with all of Turati’s recent success, let it be known that she is not the only star that’s shining bright for the Longhorns. Her twin sister Anna Turati has been a force for Texas as she currently sits as the No. 2 ranked women’s tennis player in the country. The Turati twins are joined by No. 125 Fernanda Labraña as a trio of world-ranked players. Texas will look to use this game as a tune-up before beginning conference play in March.

The No. 7 Longhorns are set to kick off a three-game homestand starting with the match against Air Force at 3 p.m. on Thursday.