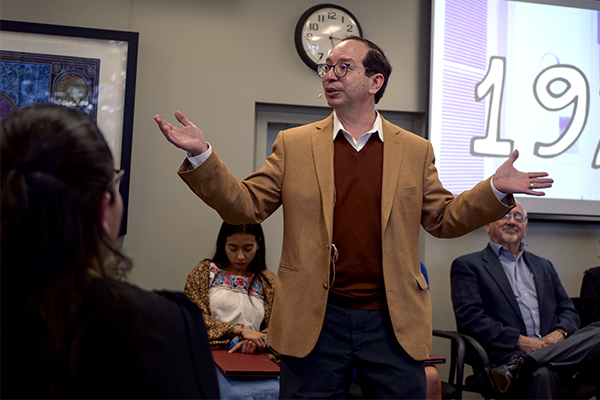 The Nettie Lee Benson Latin American Collection displayed the origins of the UT Center for Mexican American Studies on Thursday at the exhibit “CMAS at 50: A Legacy of Scholarship, Teaching, and Service.”

Chicano studies professor Américo Paredes served as the first director of the center after its establishment in 1970. The University supporting CMAS shows recognition for the Mexican American and Latino communities and their role in the United States, according to its website.

The exhibit features a live reading of documents narrating the center’s early years, including student demands such as a Daily Texan editorial from 1969 and Américo Paredes’ resignation from his position as director of the Center for Mexican American Studies, which was read by his son Vincente Paredes.

When professor John Morán González became the director of the center in fall 2016, he discovered the unprocessed archive at the Benson Collection. He made it his goal to process the collection so it would be ready in time for the center’s 50th anniversary, which is in the 2020-21 academic year.

“I really wanted to make sure that on this major milestone in the institutional history, that the archive would be available, accessible and cataloged in the hopes that the students, scholars and the public would come and learn more about the history of the center,” González said.

González said students are vital in fostering the importance of Latino Studies at UT by majoring in Latino studies, going to their events and treating the department as a second home.

Carla Alvarez, Latino Studies Archivist at the Benson Collection, said student activism is important and students should visit the exhibit.

Alvarez said her favorite item from the exhibit is a poster named “Pasó por Aquí” from the Américo Paredes Distinguished Lecture Series, which brings prominent speakers to UT to speak about topics on Mexican American studies.

“Our classroom is working to interview important figures that contributed to the CMAS department,”  García said. “It’s important as a Mexican American student to witness this historic moment.”