Longhorns haunted by Sims’ absence in loss to Iowa State 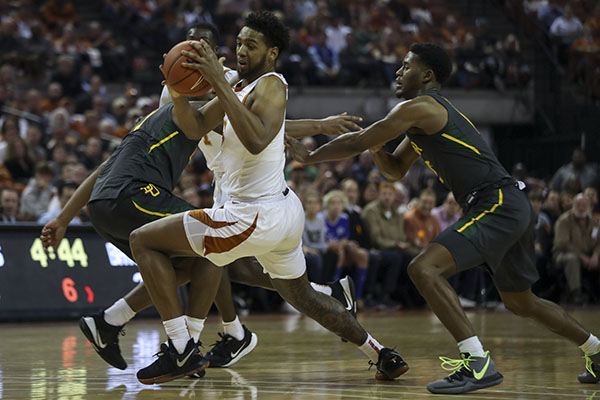 What should have been a cakewalk for the Longhorns, playing against a struggling Cyclone team without star sophomore guard Tyreese Halliburton, quickly turned into a demoralizing rout.

“We just ask (those that are healthy) to fight,” Smart said. “We didn’t have enough of that today. I thought against (No. 1) Baylor our resolve was very good, but this was not the fight level you need to go on the road and win.”

Without Sims, an athlete renowned by Big 12 coaches like Kansas’ Bill Self and Baylor’s Scott Drew, Texas had no answer for Iowa State forwards redshirt junior Solomon Young and senior Michael Jacobson.

“On the defensive end, we didn’t do a good enough job standing up to them inside,” Smart said. “When their starting bigs (shoot) 12 of 14, that’s a heck of a game from those guys, and we didn’t stand up well enough.”

The two combined for 24 first-half points, at one point outscoring the Longhorns themselves. Young attacked junior forward Royce Hamm Jr. relentlessly, who made the first start of his career in place of Sims. Hamm picked up two fouls in less than four minutes, adding to the troubles of the already shorthanded Longhorns.

With Hamm on the bench, Smart was forced to turn to freshman center Will Baker, a former five-star recruit who has shot less than 20% from the field on the year. Baker’s size was no match for the speed, strength and savvy of the veteran Cyclone forwards. Iowa State, the second-worst defensive rebounding team in the Big 12, outrebounded Texas 40-27.

Texas’ situation only became more desperate when junior point guard Matt Coleman III was forced to sit most of the second half with an apparent heel injury. Forced to heavily rely on Baker and freshman guard Donovan Williams, Texas was outscored 44-26 in the second half.

“I thought their energy and juice level was very high,” Smart said. “We did not match that. That was really the difference.”

Sims’ injury and Texas’ uninspired performance couldn’t have come at a worse time. Texas is desperately scrambling for each win as it tries to cling to its NCAA Tournament hopes. But with Saturday’s loss, its tournament chances likely rest on winning the Big 12 Tournament.

Texas still has to travel to No. 24 Texas Tech and play No. 14 West Virginia in Austin, who handed Smart the worst loss of his tenure at Texas in their last meeting.

The Longhorns next play TCU in Austin on Wednesday.