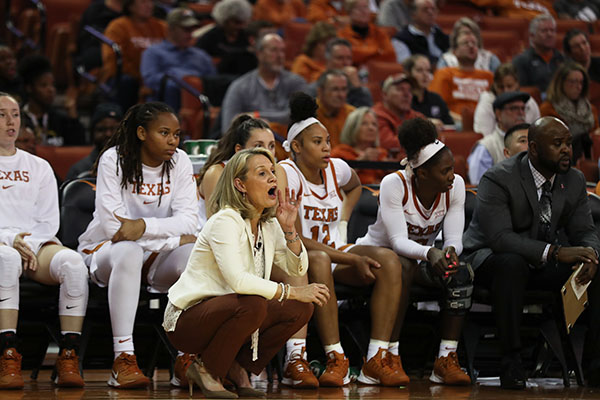 Head coach Karen Aston’s squad sure needed a pick-me-up going into Saturday night’s game in Lawrence, Kansas. The Longhorns headed into the matchup with the Jayhawks after an 18-point loss at home to Iowa State earlier this week.

They did not get any sort of reprise, as Kansas — who sits at the bottom of the Big 12 standings — pulled away in the fourth quarter for a 82-67 win that could put Texas’ NCAA tournament chances in jeopardy.

“I thought that (Kansas were) the aggressors tonight, no question about it from the start of the game,” Aston said. “I thought that our turnovers in the first half and lack of toughness really gave them confidence, and once they got confidence on their home court it was a tough night for us.”

The Jayhawks, who picked up just their second conference win of the year and are now 13–11 on the season, took advantage of a good shooting performance and a defensive stand in the second quarter to take down Texas.

Senior forward Joyner Holmes, who started for the Longhorns, led the team with 17 points. Holmes was part of the Longhorns’ inside attack that earned praise from Aston after the game despite the loss.

“I tried a different lineup tonight to see if it would give us a little different vibe,” Aston said. “I thought we did a better job of getting our bigs involved tonight, but the difference was the guard play. There’s no question we couldn’t stay in front of their guards all night.”

The Jayhawks ended the game with four of their five starters in double figures. Kansas shot the ball well, going 29-for-54 from the field to finish the day at over 50% from the field.

The Longhorns fell for the ninth time this season, and for the first time this season, Texas has now taken consecutive losses. The parity in this year’s Big 12 has taken a big step up, something Aston spoke on after the game.

“(The Big 12) is a lot tougher than people think it is,” Aston said. “I think that … some of those that haven’t necessarily been rewarded with wins are a little disrespected. The bottom line is from top to bottom, I said this before we ever started league play, that this was the best I’d seen in years.”

That type of deep conference means that the Longhorns face stiff competition every night, even against the last-place team in the conference.

“Every night is pretty tough, and especially when you get to that second round (of games) where everybody knows each other really well.” Aston said.

What’s plagued the Longhorns as of late has not been a matter of talent. Texas cruised through much of the conference season as one of the top teams in the Big 12. But Aston’s squad just hasn’t been able to put together a complete performance.

“We haven’t necessarily played four quarters in a while,” Aston said. “And if I had an answer, I would fix it.”

The Longhorns have no time to rest, as they return to Austin for a date with West Virginia, who won a nail-biter against Texas just over a month ago in Morgantown.

And if there was any lesson from Saturday’s matchup, it’s that there’s just no rest for Texas women’s basketball in the gauntlet that is the Big 12.

“We didn’t shoot the ball well, and we just had a really difficult time staying in front of their guards tonight,” Aston said. “(T)hat’s the difference in the game.”