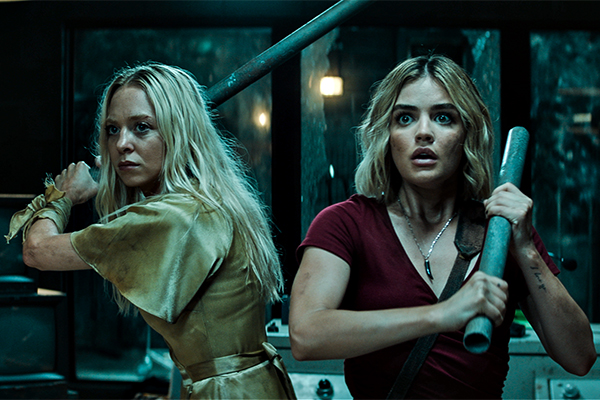 Audiences should stay on the plane.

“Fantasy Island” is the newest genre film from horror production company Blumhouse. The film, loosely based on the original TV series from the 1970s, follows several guests who arrive at a vacation getaway where their greatest fantasies are said to come true. What ensues is an unpredictable and twisted adventure featuring magic water, “Dr. Torture,” masked gunmen, imaginary husbands and more twists than a game of “Twister.”

The main cast of “Fantasy Island” is led by an eclectic group of seemingly random vacationgoers. Lucy Hale’s (“Pretty Little Liars”) Melanie is exceptionally sharp and occasionally crude with her dialogue. Her character’s flirtatious yet intimidating personality comes through with her entertaining performance. Jimmy O. Yang and Ryan Hansen play a duo of step brothers named Brax and Bradley. Their over-the-top and exaggerated acting results in several cringeworthy moments — no thanks to the weak script. Maggie Q portrays Elena, who is a much more mature and reserved character. Unfortunately, that’s the extent of her performance.

Patrick, played by Austin Stowell, is a police officer striving to become a soldier to honor his late father. Stowell portrays Patrick as a gentle, defensive character, often doing much of the heavy action work throughout the film. What should’ve been an extremely interesting and off-putting character in Michael Peña’s Mr. Roarke, the island’s owner, is simply boring. Peña lacks charisma and isn’t as menacing as he should be.

“Fantasy Island” shines in its usage and portrayal of the fantasies themselves. Haunting scenarios overlap into one another, offering some really intriguing connecting sequences. The elements and scares of each fantasy feel interesting enough, showcasing tense torture style horror, frightening war scenes and drug cartel brawls. The antagonist designs are devilishly cool costumewise, ranging from grinning masks leaking with black ooze to disgustingly stitched mouths.

Blumhouse’s newest fright flick’s downfall is its lackluster and nonsensical script. “Fantasy Island” plays a lot with interconnected storylines and hidden backstories. Unfortunately, many of these elements are revealed in rushed and shoe-horned twists and muddled character motivations. While most of the fantasies are enjoyable at face value, many of them don’t reach their full potential. Some feel more important than others, with several feeling relatively tame when compared to other sequences.

Throughout the film, random characters are added to the protagonist grouping, forcing audiences to immediately root for and sympathize with characters who serve solely as plot devices. As intriguing as the “Fantasy Island” storyline is, it failed to reward audiences with a cohesive and cathartic conclusion.

“Fantasy Island” may be enjoyable for a gaggle of teenagers looking for a late night scare, but fans of the original series and Blumhouse’s more prestigious horror entries “Get Out” and “Halloween” will surely be disappointed.

2 imaginary husbands out of 5