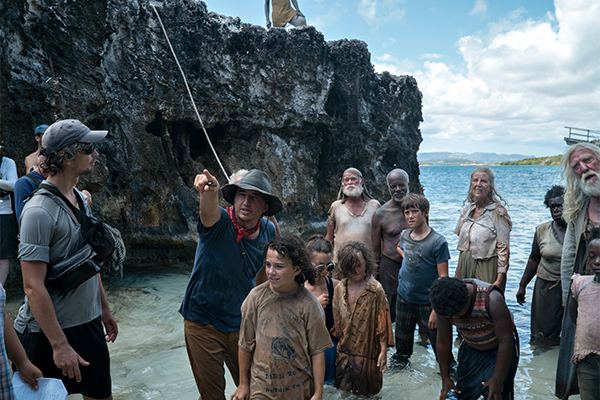 Oscar-nominated director Benh Zeitlin is back with a new film titled “Wendy.” The film is a loose adaptation of the classic story “Peter Pan,” focusing on young Wendy as she discovers an island where children remain young forever. The Texan sat down with Zeitlin to discuss the filmmaking process of his new youthful adventure.

The Daily Texan: What is your advice for student filmmakers?

Benh Zeitlin: It’s a mistake to try to figure out what other people want you to make, especially when you’re a student. So much of your life is just learning and watching film. I think you can fall into the trappings of wanting to make a film that is like another film or like a combination of other films you like. I always feel like the best film you can make is the film that’s inside you. It’s an expression of your experience (and) who you are.

DT: Can you talk about the handheld, spontaneous cinematography decisions in the film?

BZ: We wanted it to feel like we just stumbled upon the kids tearing down this mudslide, running along this perilous cliff, and we just started chasing after them not knowing where they’re going to go. Obviously, there’s an immense amount of planning behind all of that stuff. Making it safe enough to let the kids just do whatever they wanted was a huge ordeal. There’s a couple of instances where we’re just like, “Slide down this hill as many times as you want to get as messy as you want.” We just let them go.

DT: What was it like working with Yashua Mack who plays young Peter in the film?

BZ: He does not like authority, he does not like rules (and) he does not like to be controlled. If you were to come on set and just give him orders, he would just say no. What we did, both in order to teach him how the scenes were supposed to go and motivate him to do them, is we had one of his friends on set. We would teach (the friend) the scenes, (and) he would rehearse the scenes with our actors. We would start shooting with him as a stand in, and Yashua (who plays Peter) would watch (and) learn the scene from him. When we were going to shoot (Yashua’s) coverage, I would go up to (him) and just say like, “Hey, so you think you can do that better?” And he’d be like, “Yeah, yeah, watch this.” And then that would motivate him to really show what he could do. It just was a matter of making it a game for him.

DT: Can you talk about your unique casting process?

BZ: We cast all nonprofessional actors, and we do it in a very grassroots way, for lack of a better word. The same method you would use to try to get people to vote who usually don’t vote is the same way we go after our cast. We’re going to schools, we’re going to community centers, churches, and just trying to get people to consider performing who haven’t ever had that experience before. We needed to find kids that felt like they would really run away and follow Peter off to Neverland.