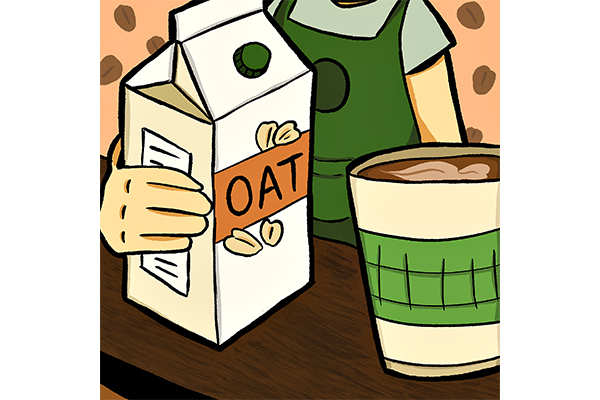 Requests for oat milk as a dairy alternative in dining halls trickled in to University Housing and Dining this year, UHD registered dietitian Lindsay Wilson said.

UHD continuously receives student feedback regarding food and beverages, Wilson said. But because oat milk is still a niche option, it has yet to become readily available through UT’s vendors and has not been added as a milk alternative in Jester 2nd Floor and Kinsolving dining halls, she said.

“If it does become a staple item that sells just as well as the soy and the almond, they probably will then make it available to (the) industry service setting,” Wilson said.

UHD added bulk dispensers of almond milk in the dining halls two years ago, but they had to be removed after one year, Wilson said.

“It just wasn’t as popular as the soy milk was,” Wilson said. “We were not moving enough product for our … vendors to actually keep that in stock.”

Although almond milk is no longer available in large batches in the dining halls, Wilson said it is available for individual purchase in campus convenience stores.

UHD has also steered away from offering cartons of alternative milks in dining halls because it is more difficult to keep track of their refrigeration and expiration, Rodriguez said.

“If it’s in a regular little cooler that they’re grabbing, we don’t know … how long they keep it out and things like that,” Rodriguez said.

Time and temperature are the biggest factors that need to be controlled in dining halls, Rodriguez said. Once a carton of milk is opened, he said it needs to be labeled with a use-by date so it can be discarded before expiration.

Rodriguez said the large batches of soy and dairy milk are in refrigerated cases, so it is easy to control their temperature.

Rupa Shankar, a management information systems, business honors and Plan II senior, said she prefers to drink 2% and skim milk. Besides identifying them as sweeter milks, Shankar said she cannot taste the difference between almond and oat milk but understands that people have different tastes and preferences.

Finance senior Sri Chakra Narayani Narasimhan said she used to drink almond milk but switched to oat milk because it has a milder flavor and is more similar to dairy milk. As a freshman, Narasimhan lived in the dorms and saw whole, 2% and soy milk in dining halls.

Narasimhan said it would be better if more nondairy options were offered. However, she said she recognizes that it may be challenging for a university to accommodate multiple milk preferences when serving thousands of people.

“Because soy is so abundant and has reached such great popularity, that’s easier for them to accommodate,” Narasimhan said. “I would rather have oat milk, but I expect a coffee shop to accommodate me, not a university.”