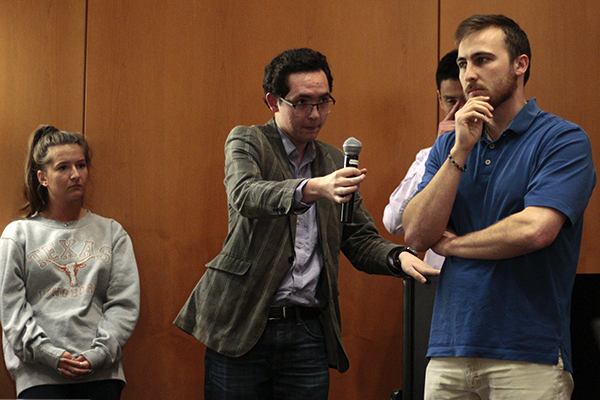 Student leaders discussed a bill establishing the scope of SG to only cover matters that pertain directly to students and exclude outside political ideologies and issues. The legislation was sent to the rules and regulations committee after an extended question-and-answer period.

“Let the scope of Student Government pertain to matters that affect students and pertain to campus only,” the legislation said.

Matters that do not qualify include state, federal or international politics or statements regarding support or condemnation of any political official, if it is not related to the University.

The assembly discussed a similar piece of legislation in November, according to a Daily Texan article written Nov. 12. Jordan Cope, law school representative, authored and sponsored similar legislation, according to the article.

The assembly also passed previous legislation to establish an international student representative after a debate.

A bill calling for attendance requirements for the executive board, which include president, vice president and chief of staff, was also brought forward. After discussion, the bill was sent to the rules and regulations committee.

Zachary Pisarski, author of this legislation, said the assembly members already have attendance requirements, and the bill establishes those same requirements for executive board members.

“It creates a disconnect between assembly and executive board when they (don’t attend the meetings),” said Pisarski, Cockrell School of Engineering representative.

Student body president Camron Goodman said in the meeting that the purpose of the assembly meetings are for the legislative branch to discuss and pass legislation, and the executive board has separate duties that take time away from attending the meetings.

Jordan Clements, who co-sponsored the bill, said the bill would also create new relationships between the assembly members and the executive board.

“It’s very necessary to hold everyone in SG to the same standards.” said Clements, College of Natural Sciences representative. “(If this passed), there would be less of a hierarchy between members (of the assembly) and the executive board.”

Clements said that if assembly members are held to a high attendance standard, executive board members should be as well.

“Making sure that we’re at every assembly meeting we can be is an integral component of being tuned in … to the Student Government process,” said Jakob Lucas, speaker of the assembly.