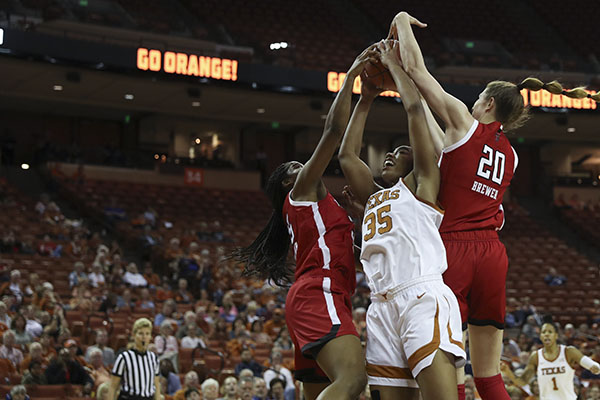 When Kansas State and Texas met earlier this year in Manhattan, Kansas, the game came down to the final minute, where the Longhorns were able to stave off a comeback and win.

This time, the visiting Wildcats returned the favor. Kansas State held off Texas in the fourth quarter to hand the Longhorns a 60-54 loss Saturday.

“I thought that for about 90% of the game, our game plan was pretty spot on,” Texas’ head coach Karen Aston said. “(It was) just that 10% that we lost some detail and gave them some easy buckets.”

The loss was the Longhorns’ fourth in the last six games, bringing their record in Big 12 play to just 8–6. This slump comes after the team had overcome a relatively slow start in conference play with a five-game winning streak to stand at 6–2 about a month ago. But Saturday afternoon, the Wildcats put another dent in Texas’ resume, outscoring the Longhorns 15-7 in the final period to cap off a gritty win.

“I thought we were sped up a lot,” sophomore center Charli Collier said. “A lot of shots that we took … it was just one dribble pull-up or we just didn’t run the play through. I just feel like they sped us up, and we didn’t play at our pace that we normally do.”

Collier led the way for Texas with 17 points along with six rebounds and a solid shooting performance, going 7-for-16 from the field. It wasn’t enough, however, as the Longhorns shot 1-for-15 from beyond the arc, while the Wildcats finished 6-for-18.

The Longhorns seemed to have the win in their grasp midway through the third quarter after opening up the second half on a 10-2 run, as they led by seven with just over two minutes left in the penultimate period. Kansas State was able to climb out of that hole with a 7-2 run of its own just before the break to bring the game to within two points.

“I have to go back to that stretch in the third quarter where I thought we were playing really good,” Aston said. “But we got in too big of a hurry to throw … the knockout punch, which doesn’t really necessarily occur in Big 12 play, instead of just taking what was there in transition or in the open floor. And I thought that’s where it got away from us, because (Kansas State) hung in there.”

Kansas State ran man-to-man defense for most of Saturday, something that they did not do as much when they played the Longhorns previously in Manhattan. Kansas State head coach Jeff Mittie said his team planned to play ten to 15 possessions of zone, but the Wildcats ended up sticking to man-to-man the entire way.

“They played (man-to-man), it wasn’t anything that we hadn’t seen on film,” Aston said. “We prepared for both (man-to-man and zone defense). The adjustment we talked about making … was that there were some driving lanes that we didn’t possibly anticipate.”

The Longhorns created good shooting opportunities for themselves late in the game, particularly two 3-point attempts for senior guard Sug Sutton that would’ve tied the game, but the shots just didn’t go in.

“I thought it was good execution,” Aston said. “They were open looks, and they were off reversal and the posts set good screens. I thought both teams played hard, they just made a few more shots than we did. Assists are definitely a difference-maker, and they shot the three better than we did, so credit to them. … (W)e played hard though.”