Longhorns win on the road against Kansas State 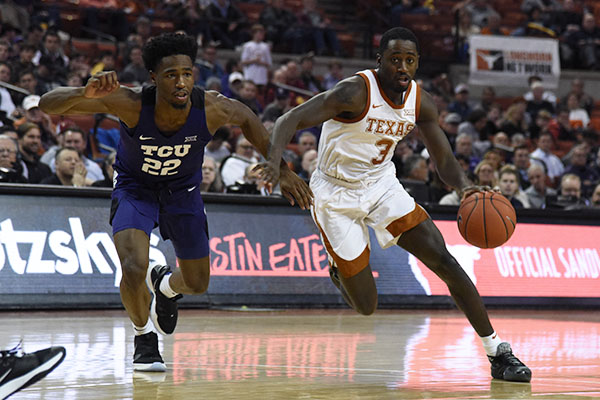 A week ago, Texas’ season looked like it was practically over.

After losing four games in a row, three of which were against either ranked teams or teams receiving votes, it looked like getting a bid to play in the NCAA Tournament was entirely out of the question.

However, the Longhorns have kept alive what little hope remains by winning two games in a row, beating Kansas State on the road 70-59 Saturday.

With games against ranked opponents still on the schedule, it wouldn’t be impossible for Texas to earn some résumé-boosting victories. But for now, morale has definitely turned around since the losing streak.

“I don’t think it was relief in the locker room,” Texas head coach Shaka Smart said after defeating TCU on Wednesday. “Our guys were genuinely really really happy.”

The strategy to win in Manhattan, Kansas, differed largely from the factors that allowed the team to beat the Horned Frogs. Freshman center Will Baker, who put up a career-high 20 points against TCU, only played six minutes against the Wildcats.

Instead of leaning on the young big man combo of Baker and freshman forward Kai Jones, Smart leaned on his veteran trio of guards to carry the weight. Sophomore guard Courtney Ramey led the team in scoring with 26 points, while junior guard Matt Coleman III and redshirt sophomore guard Andrew Jones each chipped in 12 points of their own.

Jones in particular has played a large role in the team’s turnaround. Against TCU, the guard put up a career-high 21 points, and has consistently been contributing on offense throughout the season. His performance against TCU showed that this team may not be backing down just yet.

“It was a win that we definitely needed,” Jones said following the win against TCU. “We’ve got a lot of adversity that we’re fighting through internally right now. We’re still confident and pushing forward and trying to make the best of this season.”

The team is still missing key contributors in junior guard Jase Febres and junior forward Jericho Sims due to injury. Players who haven’t had the chance to play large roles this season have had to step up against TCU and Kansas State, including freshman forward Brock Cunningham and junior forward Royce Hamm Jr.

If this team is going to stand a chance against No. 17 West Virginia on Monday, they will have to rely on the performances of players who are now being forced to play more minutes. The Longhorns have shown they can win, but the players must continue to execute.

“With guys hurt you just have to find a way to win,” Smart said after the TCU game. “It’s easier said than done, but our guys really did a good job staying connected throughout the game. But the sense after the game was just excitement.”

With only four games left in the regular season, Texas will have to continue to take advantage of every opportunity that comes their way.