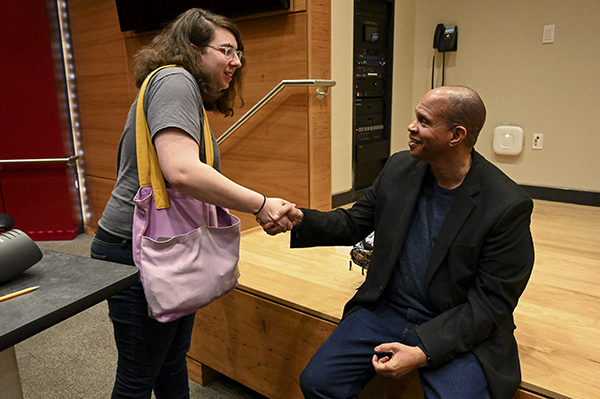 About 120 students attended a discussion on Friday led by a Disney Television Animation representative about working in the animation industry.

Jay Francis, vice president of Disney Television Animation, held a discussion with students at the Belo Center for New Media Center to talk to and recruit potential future employees.

Francis began the discussion with general information about Disney TV Animation, then talked about his personal career journey and answered attendees’ questions for the second half of the discussion. Francis said his passion and his coworkers kept him in the animation industry.

“I fell in love and became passionate with the art form itself — the (creativity) and the imagination that goes into it,” Francis said. “I’ve had different jobs, and one consistent thing about the animation industry is how great the people were.”

Francis works with Disney’s Diversity and Inclusion initiative, and said Disney tries to emphasize inclusivity in its diversity efforts.

“There is (the) obvious race, gender, ethnicity and wanting to provide opportunity for all, but it’s much more expansive than that for us,” Francis said. “It’s also the things are not necessarily obvious, whether it’s disabilities … veteran status, ageism, sexual orientation (or) socioeconomic status.”

Francis said the expanded diversity and inclusion efforts at Disney led him to talk at UT. He said Disney has received more resources to dig deeper into this to find a more balanced rhetoric and more diversity in its productions.

Cindy McCreery, an associate professor in the radio-television-film department, organized the event after Francis reached out to her.

“Disney is such an amazing company and brand, and I just wanted to make sure that students have the opportunity to hear from someone about how they can get in with the company,” McCreery said. “There’s so many opportunities out there and they don’t have to necessarily be in LA or know somebody or be related to somebody to have an opportunity.”

TJ Arredondo, a radio-television-film senior, said he learned how significant the role is that writing plays in the industry.