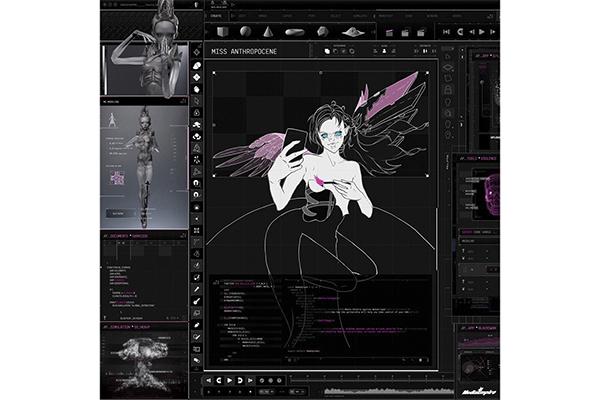 Written, produced and engineered by the artist herself, Grimes’ fifth studio album is a prediction of the world’s imminent end — with love as the catalyst.

Grimes retains her cryptic dream pop crown in a fatalist statement of doomed love and apocalyptic imminence. With a five-year gap between her last album and this one, “Miss Anthropocene” was well worth the wait.

Through the title, Grimes marks herself the goddess of the current Anthropocene, meaning the current geological age dominated by humans, while simultaneously deeming herself a misanthrope, or hater of mankind. This contrast coincides with the album’s themes: death and love.

The opening track, “So Heavy I Fell Through the Earth,” effectively sets the ethereal tone of the album. Grimes’ auto-tuned vocals amidst a sea of electric synth feels familiar as she describes love as a burden, so heavy it causes her to fall “through the earth.” The lyrics establish Grime’s pessimistic view of love as violent consumption.

Grimes’ all-consuming depiction of love continues in the irresistibly catchy EDM track “Violence.” With lyrics like, “I’m like begging for it, baby/ … Baby, it’s violence,” she reveals her desire for love’s corruption; romanticizing its potential for harm but aching for it still.

This sentiment continues with the gloomy love ballad “IDORU.” Grimes is in a state of conflicted adoration; transfixed by her lover but aware of the relationship’s inevitable end. She offers to play a “beautiful game” with her lover, despite knowing they will both lose.

In these tracks, Grimes names love as a villain. Describing it exclusively in violent terms, she’s conscious of love’s role in her downfall, blaming it for her own self-destruction and doing so beautifully in a cascade of dreamy vocals and synth melodies. The continual storyline works to make the album feel cohesive.

Throwing listeners for a loop, the upbeat country pop sound of “Delete Forever” is a stylistic stray from the rest of the album, but is nonetheless fitting with its dark lyrics. Singing over a banjo, she conveys her compulsion to chase heightened emotional states for the sake of her art. The lack of auto-tune allows listeners to hear Grimes’ raw voice, a fitting stylistic choice for the subject matter: death.

Grimes said the single is about losing six of her close friends to opioid overdose in recent years. The line “Cannot comprehend, lost so many men,” explains Grimes’ postwar feeling of grief and isolation after losing so many people around her. Reportedly written the night of rapper Lil Peep’s death, the upbeat track is a commentary on the mental toll of being a musician and the coinciding prevalence of drug use. Once listeners accept the shocking genre shift, “Delete Forever” is one of the record’s lyrical triumphs.

Grimes returns to cryptic lyrics and pop electronica in “My Name is Dark.” The album’s only guitar-heavy track, this song is a definite gem. She sings with a high-pitched innocence, “Imminent annihilation sounds so dope,” and “The angel of death, right behind me.” Grimes feels the end is near, and she’s ready.

Grimes has created another work of art. Successfully combining the darkness of her iconic third album, “Visions” with the heightened production of fourth album, “Art Angels,” “Miss Anthropocene” is a soulful masterpiece.