Donovan Williams’ relationship with his sister ignited his basketball career 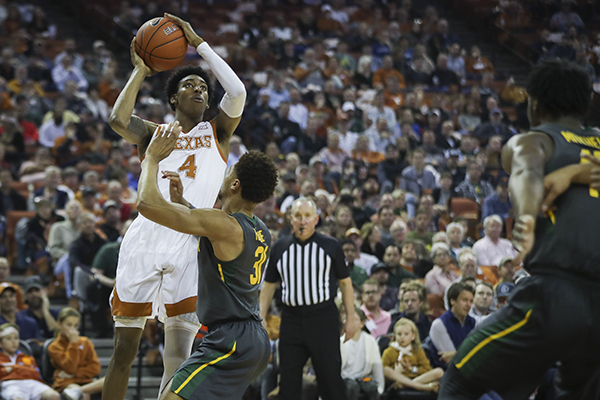 They’re separated by 10 years of age and about 1,000 miles, but in a lot of ways, Donovan is still the kid from Houston who idolized his older sister.

“Usually the older sibling, 10 years apart, they kind of live in a different world,” their mother Kim Courville-Williams said. “The two of them have been extremely connected throughout their entire lives.”

As a kid, Donovan followed Kelsey everywhere — individual workouts, team practices, games, you name it. If Kelsey did it, Donovan was there.

“In terms of a role model, she’s definitely up there for me, just with my parents,” Donovan said. “All the work that she put in, everything that she had to go through to get to where she wants to be, it paid off.”

Along with his father Darwin Williams, Kelsey played a big role in Donovan’s introduction to basketball. While Kelsey was putting up All-American numbers at Dulles High School in Sugar Land, Texas, Donovan began playing for the Little Dribblers in a recreational league in The Woodlands, just north of Houston.

After spending his childhood in the Houston area, Donovan and the Williams family made a big move. When Kelsey accepted an offer to South Carolina, the tight-knit family packed their bags and followed.

Even with Kelsey in college, the two couldn’t be separated. Donovan would regularly stay in her dorm while she was at practice, though he wasn’t a fan of Columbia, South Carolina. He was more than happy to return to Houston after his sister announced she was transferring to Texas A&M.

In 2013, Kelsey’s basketball career took off when the New York Liberty drafted her fifth overall. Donovan’s playing career was just getting off the ground.

Donovan began playing competitively, first at a church in South Carolina and eventually on Amateur Athletic Union tours while Kelsey was in college. He would pack his bags after his summer season ended and follow Kelsey during her professional season, eager for the opportunity to surround himself with professional athletes.

He learned from NBA and WNBA players alike, as his relationship with his sister allowed him to watch professional practices. Kelsey would even watch and break down film with him to help him develop.

Her guidance helped. Donovan’s talents quickly gained him national attention, earning him a four-star rating along with five Division I offers by his senior year. As his recruiting profile blossomed, he was able to better grasp what Kelsey went through a decade earlier. He began to understand the immense pressure athletes of such caliber fall under after arriving to the University of Texas.

“She’s been through it all, and she knows I’m going through it,” Donovan said. “We both know just how stressful and how taxing the game can be.”

The two siblings still talk daily about nearly everything — how his last game went, how Texas is doing, how her season is going and reminisce about the time she gave him a black eye playing one-on-one.

As Donovan starts to get more and more minutes after cracking into the Texas rotation, Kelsey doesn’t miss a chance to be supportive or help him through the gauntlet that is Division I basketball. She just hopes he gets the most out of his college experience.

“He watched me on my journey, and now I get to pay it forward and do the same for him,” Kelsey said. “And that’s pretty cool.”