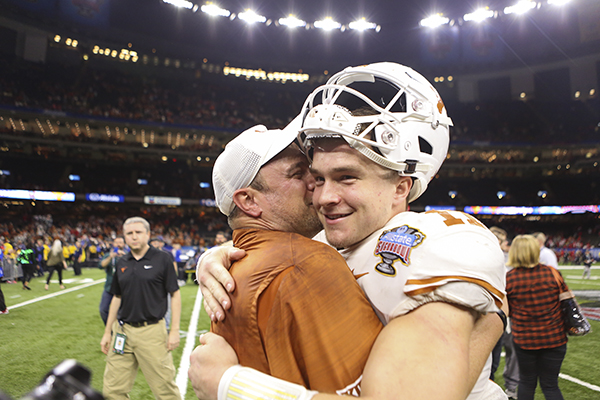 Expectations for Texas Football in 2019 were sky-high after the Longhorns started the season ranked No. 10 in the preseason AP Top 25 poll. However, other analytical ranking systems were down on the Longhorns, placing them outside of the top 25.

Now, those same rankings are the ones expecting vast improvement from the Longhorns.

The Football Power Index has been ESPN’s main analytical ranking system. Using past results, the statistic projects future outcomes by simulating the college football season 10,000 times. Texas was ranked No. 31 in the country before the 2019 season according to FPI — they finished the season No. 20.

Now, they come into the 2020 season ranked No. 7 in the country, ahead of traditional power houses like Auburn, Florida and Georgia.

The success and point system, more commonly known as SP+, was created by ESPN writer Bill Connelly. During the season, the stat examines whether every play for each team was a success, while also factoring in “explosive” plays to calculate a ranking. The system usually outperforms even Vegas oddsmakers, winning against the betting spread at a rate of 51%-54% on average.

Texas was ranked No. 35 before the 2019 season in SP+ and finished No. 26. That’s right, Texas overachieved last season according to both ranking systems. Next year, however, Texas is ranked No. 14 in the country by SP+ heading into the 2020 season.

The main reason for this is a change in returning production. As the biggest influence for preseason SP+ rankings, “returning production” factors in just how much talent is coming back to the team. The biggest correlation to success on offense is the number of passing yards, rushing and receiving yards and total starts from the offensive line returning. On defense, nearly all of it comes from the number of starters in the secondary returning.

It would make sense then that Texas ranked No. 121 in the country last year in returning production after losing top rusher Tre Watson and eight total defensive starters.

Now, Texas ranks No. 21 in returning production, bringing back 82% of its defense — nearly double the amount of  2019’s 48%. Last year’s midseason injuries to sophomore safeties Caden Sterns and B.J. Foster among others gave young players such as freshman safety Chris Adimora and sophomore corner D’Shawn Jamison a chance to garner big-time experience. While this certainly hurt Texas’ short-term success, the reps these players got may come in handy this year.

Perhaps even more notably for Texas fans, early-season foe LSU is on the other end of this spectrum. LSU came into the 2019 season ranked No. 15 in the country in returning production, bringing back loads of talent which helped them to their magical national championship run.

However, this year LSU is ranked No. 127 in the returning production — nearly dead last. In addition to losing Heisman Trophy winner Joe Burrow, the Tigers will be without top rusher Clyde Edwards-Helaire, All-American safety Grant Delpit and several key coaches.

At Texas, expectations never seem to fall. Whether it’s fair or not, the standard for the Longhorns remains at that of traditional blue bloods. These rankings only fuel that fire and sets the stage for a potential do-or-die season for head coach Tom Herman and the Longhorns.