Texas baseball falls to LSU in first loss of season 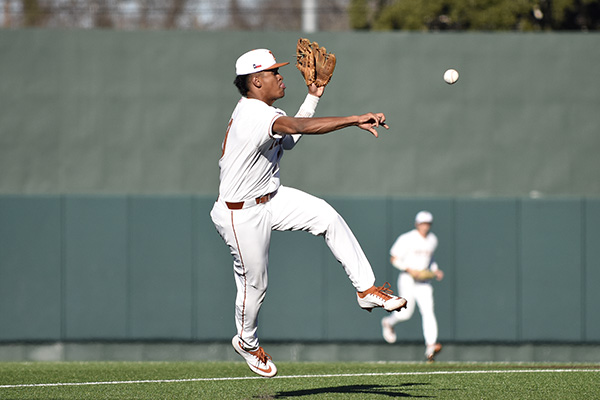 After storming through the first nine games of the 2020 season, Texas finally hit a roadblock. In its first matchup against a ranked team this season, the Longhorns fell 4-3 to LSU in Houston.

Earlier on Friday, both Oklahoma and Baylor won their games for the Big 12. While Texas put up a strong fight, they were unable to follow suit for an SEC sweep.

“I’m so glad our kids are playing in this type of tournament,” Texas head coach David Pierce said. “They have a great opportunity to play in front of crowds and against good teams.”

Texas and LSU are two of the most well-respected teams in college baseball. Both teams are tied at second after USC with six national championships each. Last year, the Longhorns swept the Tigers.

“This is all planning for conference,” Pierce said. “It’s about having the ability to be good inning one through nine and strike a balance.”

LSU was able to score early with a hit deep to center field that barely stayed in the park. Minutes later, they managed to score again after a play that was initially ruled out was reversed on video review and their runner was deemed safe.

Texas found themselves trailing by two at the end of the second and insisted on coming back with an answer. Redshirt senior catcher DJ Petrinsky crushed the ball out of the park for a solo home run in the third to put Texas on the board. Senior outfielder Duke Ellis had a double-digit pitch at-bat before taking the walk and loading the bases.

An RBI from redshirt junior infielder Zach Zubia allowed freshman infielder Brenden Dixon to slide in and tie up the game at two each.

With less than half the game played, Texas seemed to be wearing down LSU sophomore pitcher Cole Henry, who threw 95-plus mph fastballs. But junior pitcher Bryce Elder had a magic slider accounting for double-digit strikeouts for the second week in a row. Each pitcher settled into a rhythm that led to a low-hit game and not much action on the bases.

In the fourth, freshman infielder Trey Faltine got the go-ahead run off of a bunt from sophomore outfielder Eric Kennedy, and Texas took their first lead of the game. This was Texas’ last scoring play, as the rest of their fight came from their pitching game. LSU took a two-run lead in the sixth to put them back on top, and Texas was unable to answer.

“I was really proud of our guys,” Pierce said. “We didn’t get the win, and there’s no consolation for that, but we’re still learning and we’re still growing.”

In an important Friday night game that drew a large crowd, Texas proved that it is able to compete against ranked powerhouses. The Longhorns will get a chance to redeem themselves at 7 p.m. Saturday against Arkansas.