Texas softball gets fourth ranked win of the week 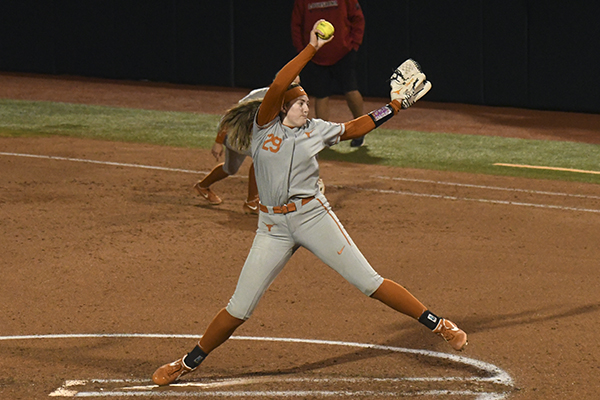 Coming off wins against No. 10 Louisiana, No. 1 UCLA and No. 2 Washington this week, the Texas Longhorns looked unstoppable. The run didn't last long, though.

In 14 innings across two games on the West Coast on Saturday, all it took was one inning for the Longhorns to be handed their third loss of the season.

In their first game of the afternoon, Texas took on the Fresno State Bulldogs and suffered a surprising 3-4 loss. The loss was a direct result of an uncharacteristic slow start.

The first inning was nothing short of chaotic. The Bulldogs took the field ready to go, and for the first time all season, it seemed senior pitcher Mirada Elish and company did not. The first batter, sophomore outfielder McKenzie Wilson, walked on four consecutive balls, then managed to steal second. A fielder’s choice got the second batter out but got Wilson to third, and an RBI single got Fresno State on the board.

“We’ve gotta make some plays if we want to help our pitching staff out and beat some of these tough teams in big situations,” Texas head coach Mike White said.

The Longhorns’ atypical first inning continued with another single followed by a wild pitch, highly unlikely Elish, which advanced both runners. Another walk, single and wild pitch saw the Horns down 3-1 at the end of the inning. Elish had thrown only four wild pitches in 12 games pitched prior to Saturday.

Freshman pitcher Courtney Day managed two home runs in the game, but other than those two solo bombs, Texas found themselves unable to get on the board. The Texas pitching staff looked its normal dominant selves for the next five innings, holding the Bulldogs to one more run, but the Longhorns just couldn’t get it done at the plate as the early two-run deficit proved too deep to beat.

Texas brought its low-scoring nature into the next game against Michigan. Sophomore pitcher Shealyn O’Leary had a stellar day in the circle, allowing only four hits and zero runs with six strikeouts to hold Michigan scoreless. O’Leary currently hasn't lost a game from inside the circle, but that’s not what she’s concerned about.

Containing the No. 13 Wolverines proved to be exactly what the Horns needed. They went five innings scoreless themselves before squeaking one out a run off a flyout in the bottom of the sixth.

The Longhorns now have four wins against top 15 teams this week and will look to carry their momentum into a matchup against Boise State tomorrow and the Longhorn Invitational next weekend.

“It just keeps coming,” White said. “If you want to be the best, you’ve gotta play them.”