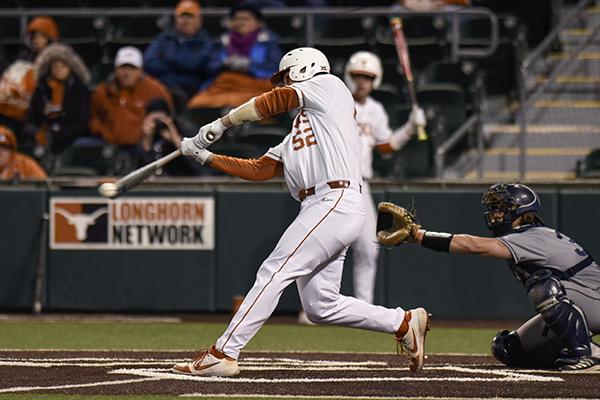 In Sunday’s 9-8 loss against the Tigers, Texas committed five errors, leading to four unearned runs that would prove the difference in the game.

“Some point in time, we’re going to be punched in the mouth, and it’s going to be new for some of these new guys,” Texas pitching coach Sean Allen said before the season. “We’re going to have to be able to handle that adversity and move on in the season.”

The most glaring mistake of them all was sophomore pitcher Kolby Kubichek’s error in the sixth inning. With Texas holding onto a newly minted 4-3 lead after a three-run fifth inning, Kubichek went into the game for sophomore starter Coy Cobb and immediately was hit a comebacker right into his glove.

But the right-hander threw the ball over junior first baseman Zach Zubia’s glove to allow his first baserunner. Kubichek would never recover from the mistake, allowing four runs as Missouri jumped out to a 8-4 lead.

The jam led to a string of relievers and substitutions by Texas head coach David Pierce, who kept searching for answers but found them far too late.

“We’re still trying to figure out the value of every one of our players and how we can utilize players,” Pierce said. “So there’s a lot of things that we’re still evaluating and figuring out going into conference play.”

The Longhorns, much like the Razorbacks in Saturday’s game, kept chipping away at the lead and eventually closed the gap to 8-7 before the ninth inning. But the error bug that seemed to plague the Longhorns all night struck once more.

With runners on the corners and one out, freshman catcher Silas Ardoin had a chance to make a big defensive play and throw out a runner trying to steal second. But his throw missed by several feet, allowing the Tigers’ runner on third base to score.

It was a costly mistake that gave Missouri the insurance run that would be just enough for the Tigers to escape with the game in the ninth inning.

In the bottom of the inning, senior right fielder Austin Todd hit an RBI single to bring the Longhorns within one and put runners on the corner. But senior outfielder Duke Ellis couldn’t convert, striking out looking on an outside fastball, looking on in disbelief as he and Longhorn fans surely thought the pitch was a ball.

One of the few bright spots in the game were Todd and junior reliever Kamron Fields. Todd hit 3-for-6 and reached base safely for the 12th game of the season.

Fields threw two quick 1-2-3 innings in the seventh and eighth as the Longhorns were trying to rally and only needed 15 pitches in those two innings.

“We thought about putting (Fields) in the game in the situation with the bases loaded,” Pierce said. “But I just didn’t feel like it was fair to him at that point. So we gave him a clean inning, and he did a great job. That’s something we can build on.”

If you had told Longhorn faithful before this weekend that Texas would go 1–2 over their three-game weekend stretch against LSU, Arkansas and Missouri, nobody would have guessed that it would come with a win against No. 6 Arkansas and losses to No. 11 LSU and unranked Missouri.

But in the three one-run games, the difference came down to just a few key mistakes.