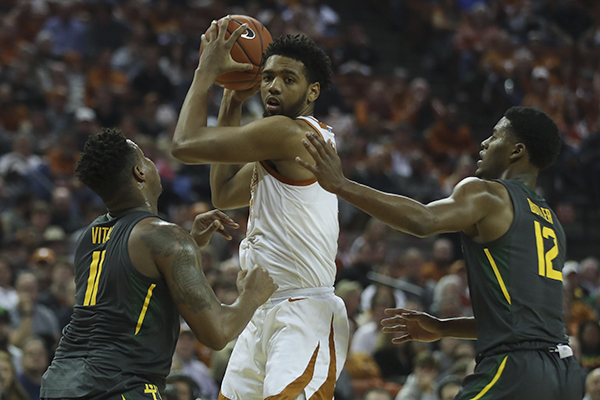 Over the course of a month, Longhorn fans have gotten to know two different versions of the men’s basketball team.

In the first half of February, Texas not only lost four games in a row but also lost two starters in junior forward Jericho Sims and junior guard Jase Febres. The absence of Sims and Febres forced the team to create new lineups with the season on the line.

The second half of the month can only be described as improbable and exciting. With four consecutive wins heading into a road matchup with Oklahoma on Tuesday, including two in a row over ranked teams, Texas has turned its season around. The depth of the roster, including junior forward Royce Hamm Jr. and freshman forward Brock Cunningham, has been crucial for a team whose season appeared to be over just two weeks ago.

“Just to see that their hard work and their talent is finally being able to be displayed, despite the adversity that we’ve been through,” redshirt sophomore guard Andrew Jones said regarding the performances of Hamm and Cunningham. “Nobody expects nobody to be injured, but when you get that situation, you’ve got to be able to step up, and these guys are making plays like they’re supposed to.”

In addition to quality performances by freshman center Will Baker and freshman forward Kai Jones, the play of Hamm and Cunningham, who have both joined the starting lineup, has made the biggest difference in the late-season surge.

Hamm said last weekend’s victory over Texas Tech was his best performance in his time at The University of Texas. He scored nine points and grabbed six rebounds, making his presence felt on both sides of the court.

“I try to play hard every chance I get,” Hamm said. “I just tried to exceed my energy. I just wanted to come out in the second half and bring my team energy. I knew that’s what it takes in order for us to win this game.”

The players have earned the admiration of their head coach as well. The hot seat underneath head coach Shaka Smart is cooling off thanks to not only quality coaching but high effort from all of his players.

“Those guys, they’re our blue collar guys,” Smart said regarding Hamm and Cunningham. “When they lose themselves in the fight, they really play that way. We’ve been looking for guys that can be role players. I think that’s what those guys have done this last stretch of games, just losing themselves in the fight.”

However, the Longhorns can’t afford to rest on their laurels. The best remaining chance in the regular season to make an impression on the selection committee will be against the Oklahoma Sooners in Norman. If the Longhorns can win on Tuesday, they will continue to bolster their chances of making the NCAA Tournament.

“There’s still two weeks and a day until Selection Sunday, so there’s a ton of basketball still to be played,” Smart said following the win over Tech. “If we can play our best basketball and if our guys can stay connected around each other and put winning over everything else, then it does give us a chance to win big games.”