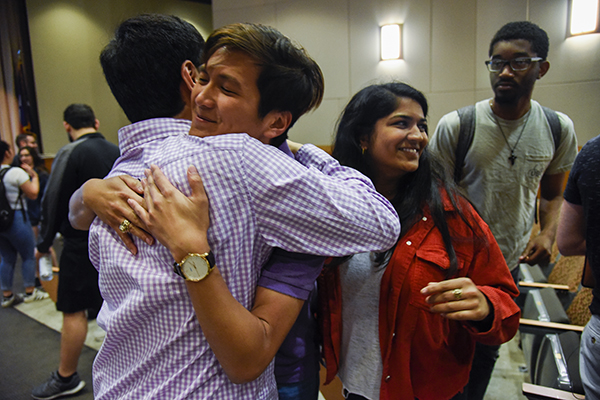 Anagha Kikkeri and Winston Hung will serve as next year’s student body president and vice president.

The executive alliance won by 111 votes out of 7,609 ballots cast through a single transferable system. This was the second time the single transferable system was used in student elections after it was approved in February 2018. The executive alliance and student representatives were elected through a ranked system that eliminated the candidate in last place every round.

Government junior Kikkeri said their next step is to discuss how to move forward with Student Government and University administration.

“I’m so honored and grateful that people trust us to do this and implement our policies,” Kikkeri said. “(Now) we’re going to follow the steps we outlined in our policy papers for implementation.”

Hung, a chemical engineering and finance junior, said they plan to follow through with their campaign slogan, “What It Takes.”

“If you asked me half a year ago if this was something that was going to happen, I would have to see it to believe it.” Hung said. “I love that we were able to create the best team possible. Win or lose, we did the best that we could.”

Kikkeri and Hung said their plans include creating a committee for students living in Riverside, establishing culturally centered study spaces, increasing the number of confidential advocates in the Title IX office and implementing an orientation program on Title IX resources.

John Austin Gerling and Ashna Kumar were named to the University Unions board of directors. Matthew Kenny was selected to be the Texas Student Media at-large board member. The next editor-in-chief of The Daily Texan will be Emily Caldwell.

The undergraduate studies representative will be Benjamin Farias. The transfer representatives will be Jordan Clements and Jaime Gutierrez.