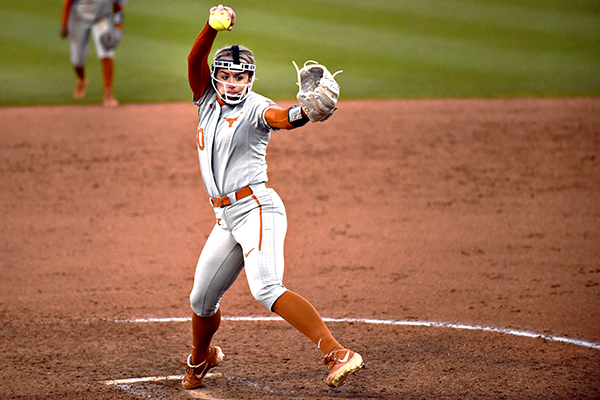 Three separate Longhorns battled Liberty freshman pitcher Karlie Keeney for at-bats of at least nine pitches in Friday’s 2-0 win against the Flames. In the end, that’s what it took for the Longhorns to overtake the Liberty squad.

After three scoreless innings, the No. 2 Texas Longhorns displayed heady plate discipline to scratch their way to two runs in the bottom of the fourth inning. The rally started rather oddly as senior outfielder Shannon Rhodes led the team off with a check-swing infield single after batting for nearly 10 pitches. Rhodes then stole second base to put a Texas runner in scoring position for the fourth consecutive inning, but this time the Longhorns were able to cash in.

Senior outfielder Kaitlyn Washington, playing in her first game in over a week due to a face bruise sustained in practice, worked Keeney for a 10-pitch at-bat, fouling off numerous would-be strikes before smashing a double down the right field line to break the scoreless tie.

Then, Texas fought through a series of pitches for the third time in the inning as junior second baseman Janae Jefferson fouled off multiple offers with Texas runners on first and third base before getting a hit to bring Washington home for the second run of the rally.

“We just try to compete for our pitch to hit,” Washington said. “With this pitcher, we had to take advantage of her mistakes.”

Having Washington back in the lineup was a welcome sight for the Longhorns on Friday. After missing the entirety of the Judi Garman Classic tournament in California, Washington was electric against the Flames.

The senior out of Humble, Texas, lined a double to the outfield in two of her three at-bats, providing the Longhorns with an offensive spark in a contest that had featured a pitching duel between Liberty’s Keeney and Texas’s senior pitcher Miranda Elish.

Washington is now tied for third all-time in school history for career doubles after her two today, and the Longhorns are certainly excited to have her power back in the lineup.

“Being out last week makes me grateful for every pitch that I get, especially because it’s my last season,” Washington said. “I was ready, I was prepared, and I’ve been practicing all week for it.”

The Longhorns will play three more games in the Longhorn Invitational, facing off against Texas Southern and Liberty once again Saturday before playing New Mexico on Sunday.

Texas will need to stay present and focused throughout the tournament if they want to come out unscathed. After playing four top 15 teams last week, the Longhorns will be the heavy favorite in every contest. The expectation is to go undefeated, but Texas head coach Mike White knows that this tournament is important to his team's development.

“We shouldn’t be playing the name on the jersey; we need to be playing our game,” White said. “I asked the team (after this game) to pick it up this weekend because I don’t think we are playing as well as we should right now.”